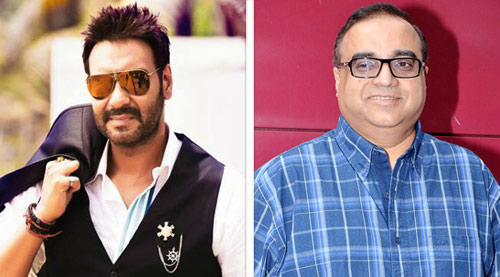 Couple of weeks ago, a rather interesting announcement has left several in a dilemma after filmmaker Rajkumar Santoshi decided to reveal about his next film. While speculations were on about his next being a Salman Khan starrer, the filmmaker decided to go ahead with a historic film, that is based on the much talked about Battle of Sargarhi. This obviously has sparked yet another controversy of sorts, as a year ago a film on the same historic event was announced by Ajay Devgn under his production banner which was titled as Sons of Sardaar.

Interestingly, the announcement of two films on the same subject was released by two such Bollywood personas who have previously worked together for the National Award winning film The Legend of Bhagat Singh. Ironically, the Ajay Devgn starrer patriotic film met with a similar fate when two other films on Bhagat Singh, the Bobby Deol starrer 23rd March 1937 Shaheed and Shaheed-E-Azam starring Sonu Sood released in the same year. But Rajkumar and Ajay decided to brave it out and the film turned out to be a critically acclaimed one. And now the latest Battle of Sargarhi have pitched the two Bollywood personas in front of each other and we at Bollywood Hungama decided to speak to trade analysts to understand the kind of effect this kind of announcement will have on the box office and the collections.

"Of course, it's going to cut into each other's collections. Something similar happened in the case of The Legend of Bhagat Singh. Obviously the audience's attention gets divided," asserts renowned trade analyst Komal Nahta. Considering the mindset of the current generation who generally has a short attention span, is there a chance of survival for both the films? Komal Nahta feels that when it comes to historic films, the first film that releases obviously holds an upper hand since it will break the suspense of the event, while the only way a second film can survive will be if it has something 'extra-ordinary'. "When it comes to historical films, the chances seem dim. If you release them simultaneously, the audience gets divided and if it is released apart, the second film has a disadvantage, unless the first film is a disaster. If the first film does decently well, in case of the second film, the story is known to everyone. Even if it is released a year in advance one cannot forget the story of a historical film that easily. I think it is not a wise decision for two people to be making."

Giving yet another perspective was trade analyst Taran Adarsh who despite maintaining the fact that it is too early to predict anything, reveals that every filmmaker has his own way of depicting a story. Stating the example of several mythological films and some iconic folklore like Devdas which has had more than one version, Taran adds, "Every director has their own interpretation of the story. Even in the past there have been several films made on the same subject and it has worked. Currently, the audience is looking for real life stories and they would love to watch good stories." However Taran is quick to add, "It is too early to comment on it since neither the release date nor the shoot schedules of the films have been finalized."

On the other hand, when we tried to analyze the factors that will give Ajay Devgn's film an upper hand we came across were two major points, star value and the fact that the film has a backing of Son of Sardaar. The first instalment of Son of Sardaar released way back in 2012 and it received tremendous response at the box office, despite the fact that it clashed with the Shah Rukh Khan - Yash Chopra collaboration Jab Tak Hai Jaan. And now, after four years, yet another film is touted to be a second installment and has a backing of a successful film franchise. Taran Adarsh maintains that star value is important for box office collections but only for the first three days and in some cases, only on opening day. He says, "Star value has an edge only for the first three days and sometimes, it plays a role only on the first day of the release. Ultimately it is content that emerges as the winner."

Also, agreeing to the fact that star value is necessary for a film, Komal Nahta however doesn't fail to overlook yet another fact wherein he is of the opinion that a star value comes handy only when the films are releasing simultaneously which is not the case when it comes to Sargarhi and Sons of Sardaar. WhileSargarhi has also started its prep, Ajay Devgn is busy with Shivaay and Baadshaho currently and he will focus on Sons of Sardaar only once he wraps up his other commitments. "We are talking about star value when films release on the same day but here Rajkumar Santoshi's film is starting now. Ajay Devgn will start after the release of Shivaay (October 28). By then, Rajkumar would have either completed the film or made a good headway. Star value will work but only if they release on the same day. If you are releasing a film six months or one year in advance, where is the comparison? Irrespective of star value or no, you are still second." However, Komal agrees to the fact that backing on the title Sons of Sardaar is definitely a plus point considering the success of its first instalment.

Varied perspectives, opinions and two filmmakers' vision of recreating a historic event on a large scale have given this Bollywood Battle a new turn. As trade analysts continue to predict and analyze the effect of two personalities' choice of the same subject to make a film, all we can do is 'wait and watch' as we see two Battle of Sargarhis unfold on the silver screen that will eventually also solve the mystery of which one has better chances of survival.