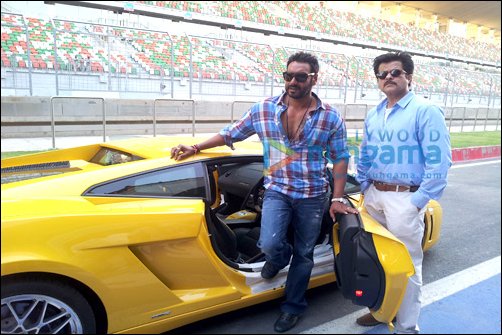 The Formula 1 racing track of greater Noida was set on fire when Ajay Devgn and Anil Kapoor stepped in their racing cars. The actors had a blasting time in the race which was organized for promoting their upcoming flick Tezz.

But as it was a race and only one could win, Ajay Devgn took the lead and won it! After the race, both the actors were very enthusiastic about the experience and said, "Winning and losing is not an issue, driving these cars was fun. We both were as 'Tezz' as we could be and it was a great fun."

Tezz revolves around a bullet train hijacking where actor Mohanlal plays a dutiful cop of the Scotland Yard Police with Ajay Devgn and Anil Kapoor in the pivotal roles.

Tezz is the story of one man, who is out to get back what was unjustly taken away from himâ€¦ the other is willing to do whatever it takes to stop him in order to serve justice; both are pitted against each other... and both are pitted against time. Lives have already been destroyed and more lives are about to be devastated as a train speeding from Glasgow to London holds the fate of Aakash Rana (Ajay Devgn) and Counter Terrorism Command Arjun Khanna (Anil Kapoor), and only one of them will succeed.