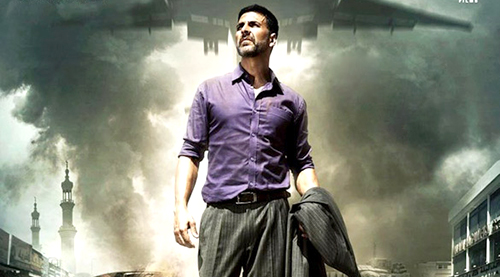 With exactly two months to go for the release of Airlift, the film is doing all the right talking. Its terrific promo has pretty much worked across all segments of the audience - those who like their films to be classy and those who want their quota of entertainment on the big screen. Last year, Akshay Kumar balanced this aspect with Baby. Now if reactions gathered from the week gone by is any indication, it is pretty much set to happen for Airlift as well.

It is always a thin line when it comes to bringing a real life tale on celluloid. First and foremost, it can never be frivolous. Second, it needs to have the correct detailing. Thirdly, it needs to have the right actors play the right role. While it is quite obvious by now that director Raja Menon has taken a no-nonsense approach towards the film, it also seems like a masterstroke to have Akshay Kumar play the part of a wealthy India businessman from Kuwait who takes it upon himself to secure the evacuation of 1,70,000 people to India.

Just one look at his filmography during last couple of years and it is apparent that at this stage of his career, when he is around for almost a quarter of a century, he is experimenting across genres and subjects with a vengeance. If Baby was a classy thriller, Gabbar Is Back took a masala action route. If he aimed at merging action with family drama in Brothers, with Singh Is Bliing he took an out and out slapstick route.

A couple of films worked quite well, one did just fine and another went down as an attempt to be bring on something different on screen. However Akshay, who was happy making out and out action films in the 90s and then switched over to comedy for a larger duration in the first decade of the Millennium, is now trying out different things at a rapid pace as he wraps up the first half of the current decade.

With Airlift, it is more than apparent that he doesn't mind playing a vulnerable soul. He doesn't feel shy of introducing his character as someone who went down from being ruthless to worthless when war broke down in Kuwait, only to find opportunities in the most adverse of circumstances and emerge heroic again. However, in the middle of this all, if he has to hit the ground while being kicked and beaten around, he isn't refraining from shedding more than just a tear or two.

Big men can cry too, and very few amongst the top actors today are letting that vulnerable side of theirs being on display!

It is going to be back to the laughs all over again in Sajid Nadiadwala's Housefull 3 while Rustom with Neeraj Pandey should bring in another twists-n-turns filled mystery tale after Special 26 and Baby. As an actor, Akshay is dabbling across varied genres and Airlift should be a nice start to that roller coaster ride he has set for himself.