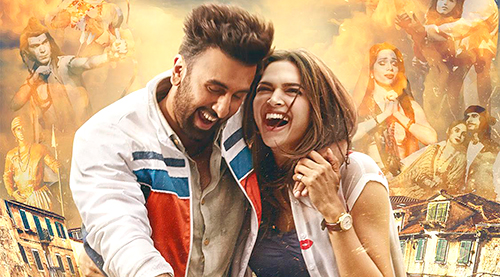 Now the fact can be told. With Tamasha just four days away from its Friday release, the secret is out of the bag. While most of the films rely on a heavy-duty climax to lend that feel of grand finale, Tamasha has two such mega sequences designed for it. While one of course arrives in the climax, it is one which is right at the beginning which lends a powerful start to the film. Since Imtiaz Ali has designed the Ranbir Kapoor and Deepika Padukone as a musical love story, producer Sajid Nadiadwala went all out in ensuring that his vision as a director was met.

"There are ample hints already thrown around that Tamasha has an inherent theater element to it. Ranbir's character is shown as a huge aficionado of thriller. This is the reason why Tamasha was ought to have some solid theatrical pieces interspersed in there," informs our source.

This means that while the song 'Chali Kahani' appears right at the beginning, it is 'Tu Koyi Aur Hai' that results in the film's culmination.

Says Imtiaz, "Yes, 'Chali Kahani' is the title sequence of the film. It is the first song that opens the film. It is about the world of this little boy (character played by Ranbir Kapoor in the grown up days), how things are playing all around him and how he is imagining various characters all around him. There are certain elements that are romantic and so he imagines Romeo and Juliet, Sohni and Mahiwal, Heer and Raanjha. Then there are certain portions that are more dramatic, so he imagines Helen of Troy and the Battle of Ramayana."

This song in particular is not just for the beginning portions but has many parts to it, hence arriving at multiple junctures of the film in many different ways, as the incidents end up shaping varied aspects of the youngster's life. While for Imtiaz it was a challenge in itself to integrate it all seamlessly for screen, Sajid stood right behind him to lend all the support that ensured that Tamasha turned out to be a mega affair.

"Since at heart Ranbir is playing a storyteller, he finds his true calling in theater. Since he has seen theater all around him during his growing up, it was imperative that we bring in these elements. This is an altogether new experience for all involved," Imtiaz adds.

For Sajid, who has seen Imtiaz spin together Highway early last year, and has shot Ranbir's Anjaana Anjaani at many exotic locales, it was pretty much akin to coming together of two worlds.

No wonder, the climax song - which has an opera kind of feel to it - has a special place in everyone's heart.

"'Tu Koyi Aur Hai' is sung by A.R Rahman himself and is again is a theatrical piece," says Sajid, "It was wonderful to see the way it was shaping in front of me, right from the time it was seeing a musical creation to the manner in which it has seen the final cut that is befitting a big screen view."

One looks forward to the end result now.