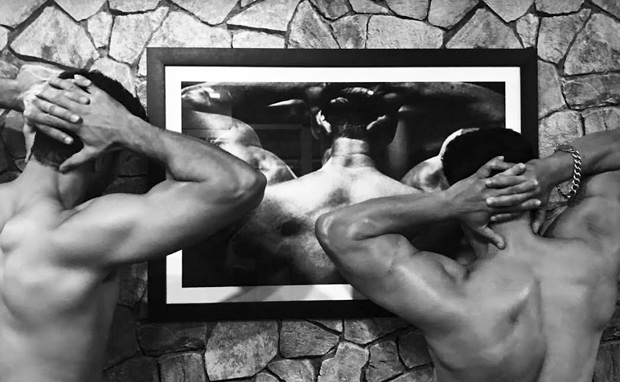 Aditya Roy Kapur has not given a box office success in a long time but that hasn't stopped the actor from working hard. Aditya Roy Kapur is currently gearing up for 2017's first release titled Ok Jaanu in which he reunites with his Aashiqui 2 co-star Shraddha Kapoor.

Well, it seems like Salman Khan has taken Aditya Roy Kapur under his wings. The actor shared a shirtless of him standing besides a now well-built Aditya Roy Kapur promoting the latter’s upcoming film. Salman also tried to pull his leg by accusing Aditya of conning him and wrote, “Ek khan ko con kiya to take this pic. Bhai let me post this on his twitter #AdityaRoyKapur.” He later goes on to warn his contemporaries Aamir Khan, Shah Rukh Khan, Ajay Devgn, Akshay Kumar and Hrithik Roshan to not get conned by the young star.

After seeing their toned body, Ajay Devgn's light response was, "Pehle aisi body toh bana loon (I need to make this kind of body, first)." Readers may recall that Aditya Roy Kapur had made his debut as an actor in Bollywood by working alongside Ajay Devgn and Salman Khan in London Dreams in 2009.

Directed by Shaad Ali and produced by Dharma Productions, Ok Jaanu is slated to release on January 13, 2017.