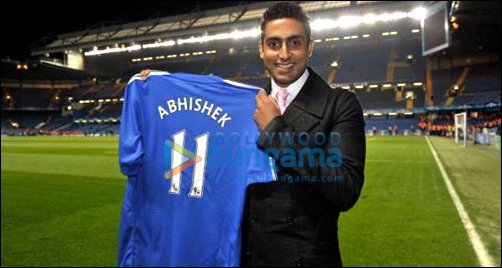 Abhishek Bachchan has long been a fan of Chelsea FC, an international football club. Well, the self proclaimed Chelsea fan Abhishek recently joined the throng of celebrities backing Chelsea's Asian Star programme as the closing date for applications draws near.

The Asian Star programme is the first scheme of its kind ever undertaken by a professional football club. Players will be judged on a series of matches and tests specifically designed and used by the Chelsea Academy to examine speed, skill and ability.

The Asian Star programme has already uncovered five potential stars of the future who went on to play for professional clubs' academies. This year the initiative offers players the chance to win a year-long place within the Chelsea FC Foundation's Elite Training Centre.

Abhishek firmly believes the Asian Star programme has been instrumental in getting the next generation of British Asians playing football. In fact the actor is even urging the parents of young players from the Under-9 to Under-12 age groups to sign up to the programme.

Applications are now open for Asian Star 2012, which takes place on Saturday 26 May at Chelsea's state-of-the-art training ground.