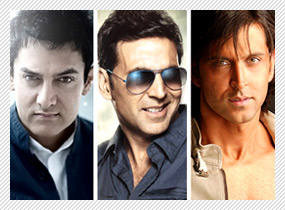 Shah Rukh Khan has done the unthinkable with his Chennai Express all set to cross the 3 Idiots total of Rs. 202 crore. While one waits to see the final station at which this express lands, calculators are already out to see the next film in the line that turns out to be a mighty biggie before 2013 comes to a close.


"Shah Rukh Khan now owns multiple records as far as opening of the film is concerned. Other than the fact that the content of this Rohit Shetty affair has been liked by the family audience, what also went in the film's favour is the release timing. With Eid adding on to the long weekend, such huge numbers were possible," informs a source.


Since holiday season continues to be most lucrative for biggies to make records, it is pretty much expected that at least four major films would have already started making their calculations.


"In next four months, there are four major biggies starring a superstar each that are arriving in theatres. What is common in each of these films is that they arrive sans any major competition, not just on the day of release but also a fortnight around them. Most importantly, majority of these films fall on holidays which means a quick fire 100 crore in collections is pretty much on the anvil," adds an expert.


First to arrive is Ranbir Kapoor's Besharam which hits the screens on Gandhi Jayanti. With Yeh Jawaani Hai Deewani behind him, Ranbir's stakes are anyways high. Akshay Kumar's Boss is carrying terrific vibes just on the basis of its teaser with director Anthony D'Souza going totally 'desi' in his second effort. Krrish 3 is the big Diwali release and its hype can be understood from the fact that its promo has already been viewed more than one crore times, highest ever number for a Hindi movie. Last but not the least, Dhoom 3 is a Christmas release and with Yash Raj and Aamir Khan in there, one can expect fireworks.


"Ranbir, Akshay, Hrithik, Aamir - More the merrier," adds a filmmaker, "We just saw how records were being broken so fast. In just a year after Salman Khan's Ek Tha Tiger, Shah Rukh came trumps with Chennai Express. Now these four biggies should further pile on huge moolah. Next year there is Salman Khan beginning the year with Mental which is going to be record breaking again. Who would have thought that more than Rs. 30 crore could be earned in a single day? Don't be surprised if Bollywood manages a Rs. 50 crore day within a year from now. Expect number of days to achieve 100 crore mark get lesser."


Now that would indeed be something.