There were stampedes outside theatres; people clamoured to catch a glimpse of the poster of Dilip Kumar stroking Madhubala’s face with a feather. K Asif’s pseudo-historical epic which was nine years in the making, was indeed something people were looking forward to. The sheer opulence and magnitude of the epic, Naushad's magical score, the enduring charm of the Salim-Anarkali story and the star power represented by Dilip Kumar and Madhubala’s real life romance, took Mughal-e-Azam to the peak even before its release. Kamal Haasan a diehard Mughal-e-Azam fan says, “They said Mughal-e-Azam won’t work. But look at what it has done. I went to see Mughal-e-Azam again to see what it did to me. It took me by surprise. I could crib to K. Asif about the length. But that would just be professional jealousy.” 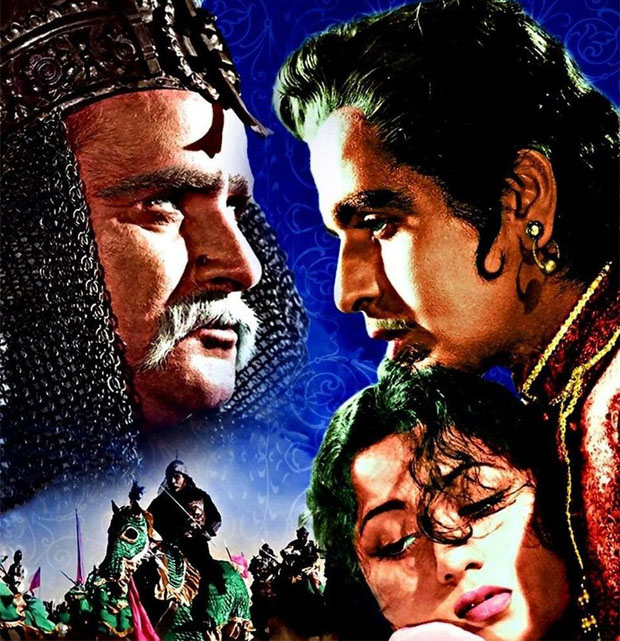 1. What made Mughal-e-Azam Hindi cinema’s most beloved film? The magic of Madhubala as Anarkali, and her love scenes with ‘Salim’ Dilip Kumar. True, the onscreen Salim and Anarkali were actually in love. But the romance had been called off halfway through the film. It won’t be wrong to say that Madhubala’s life was as tragic as her character’s. Like Prince Salim, Dilip Kumar was madly in love with her and wanted to marry her. But her father refused to bless the alliance. In his autobiography the veteran actor revealed that their relationship fell through because her father refused to part with the sole breadwinner of his family.

2. Lata Mangeshkar sang better more accomplished songs in Mughal-e-Azam than ‘Pyar Kiya Toh Darna Kya’. But none as successful as this one. Recalls Lataji, “The response to this particular song was beyond anything we had imagined. Naushad Saab had composed some other very beautiful songs for me in Mughal-e-Azam such as ‘Mohabbat Ki Jhoothi Kahani Pe Roye’ and ‘Beqas Pe Karam Kijiye’. We never knew ‘Pyar Kiya Toh Darna Kya’ would become one of the film’s USPs. People went back to see the film over and over again for this song. They showered coins on the screen. I’d credit Madhubala’s beauty and dancing with its success as much as my singing, if not more. People say to get echo effect in the song I went to the bathroom of the recording and studio and sang parts of it from there. That’s all nonsense. We recorded the song like any normal song.”

3. The original choice for playing Anarkali was Suraiya. Director K Asif actually began shooting another version of Mughal-e-Azam with Nargis in the lead. But that was scrapped and a new version of the eternal tale was started in 1950. The film took nearly ten years to complete, and at several points of the shooting K Asif thought of shelving the film. At one point Kamal Amrohi heard that the project had actually been abandoned. He quickly announced his own Mughal-e-Azam, only to be severely reprimanded by Asif.

4. Dilip Kumar was most reluctant to play Salim. “The heavy costume, the ornaments, the wig and the shooting in the intense heat of Rajasthan was all very daunting to me,” Dilip Saab explained. He nonetheless plunged into it. However there were differences with the director all through. Dilip Kumar did not attend the film’s lavish premiere at Maratha Mandir. Junior version of Salim was played by Jalal Agha, the ebullient actor best remembered for lip-syncing ‘Mehbooba Oh Mehbooba’ in Sholay.

5. K Asif insisted on re-shooting portions including the iconic song ‘Pyar Kiya Toh Darna Kya’ in colour. He wanted the whole film in colour. And he got his wish in 2004 when the entire film was colorized and released. This time, Dilip Kumar attended the premiere. K Asif was gone. He didn’t win the Filmfare award for Best director. He lost it to Bimal Roy in Parakh. Madhubala lost it to Bina Rai in Ghunghat. Prithviraj Kapoor lost it to Motilal in Parakh. Dilip Kumar was not even nominated for Mughal-e-Azam. He won the Filmfare award for best actor for Kohinoor during the year of Mughal-e-Azam. Go ahead, laugh.