In this business of brittle relationships and broken dreams it is easy to forget that Kajol and Ajay Devgn have been married for 20 years. They have co-starred in 9 films not counting a couple of guest appearances together and an animation film. Here’s their best shared space in feature films. 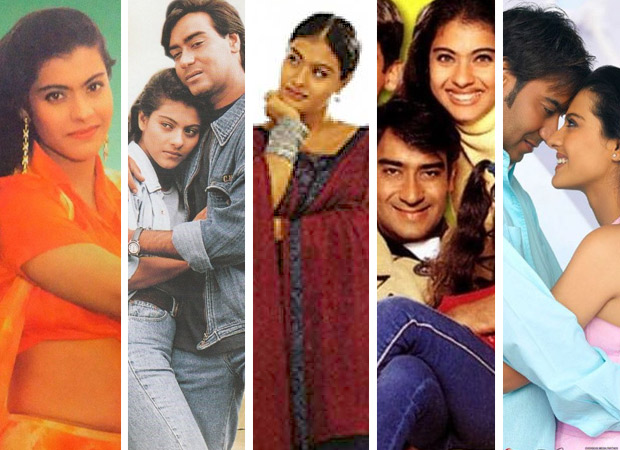 1. Pyar Toh Hona Hi Tha (1998): Kajol and Ajay Devgn met for the first time on the sets of Anees Bazmi’s awful and forgetful Hulchal in 1995. The same year they got to spend more time together in an even more awful film Gundaraj. Finally three years later they got to do a decent love story. A scene-by-scene rip-off of the 1995 Meg Ryan-Kevin Kline rom-com French Kiss. No, there was no kissing, French or otherwise, in Anees Bazmi’s film. However for the first time we saw genuine chemistry between Ajay and Kajol. Their earlier films gave them no scope for chemistry. The directors were too busy doing their maths

2. Ishq (1997): A year before Pyar Toh Hona Hi Tha (or as Remo Fernandez sang, ‘PR Toh Onna Eee Taaa’) Kajol joined hands with Devgn for some goofy fun in this Indra Kumar nonsense which also starred Aamir and Juhi.I remember Aamir telling me in an interview that Kajol was very badly behaved during Ishq. Luckily Ajay didn’t think so. In any case Ishq was a film about bad behaviour.

3. Dil Kya Kare (1981): Prakash Jha decided to move away from political dramas to make what he thought was a full-on romantic drama. Ajay, a very close friend of Jha, and Kajol became Jha’s guinea pigs in what turned out to be the weirdest love story ever made on Planet Earth. Want to know how it went? Here goes: Kajol meets Devgn on a train when she is attacked by goons. Devgn rescues her and they make love. Yes! You read that right. Years later she turns up at his doorstep with their child. I hear Ajay and Kajol still have good laugh over this one. Come to think of it Dil Kya Kare was funnier than Ishq. Unintentionally, of course.

4. Raju Chacha (2000): With this film Ajay Devgn turned producer. With his brother Raju Devgn directing Kajol slipping into the leading lady’s slot was a family obligation. The film about a group of rich orphans rescued by their saviour Raju Chacha was a big bomb at the box office. The scenes of child abuse were morbid in their tragic desperation. And Kajol as a nanny looked far from nurturing. Nysa and Yug had not arrived as yet.

5. U Me Aur Hum (2007): Ripped off from the maudlin Nick Cassavetes directed 2004 tearjerker The Notebook, this film was notable mainly for Kajol’s performance as an Alzeihmer’s patient. But the film with one-half devoted to hijinks on a cruiser required way too much patience to get to the story. If the truth be told, Devgn is yet to do a film with Kajol that justifies her presence. Would Tanhaji be that film?