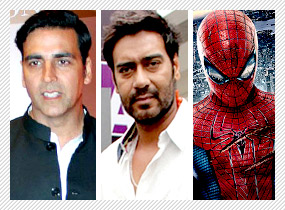 This year we have seen quite a few films battling it out for a solo release. While some smaller films decided to share the release dates with each other rather than clash with bigger films, a few risked it anyway. However, May 2014, will see yet another royal battle with the release of three big films releasing on the same day.

If the announcements are true, May 1, 2014 will witness the release of A. R Murugadoss' remake of south film Thuppakki featuring Akshay Kumar and Sonakshi Sinha, as well as Prabhu Dheva's Action Jackson that features Ajay Devgn and Sonakshi Sinha. However, while this remains a two way clash, Hollywood flick The Amazing Spider Man 2 (3D) , which is a sequel to the reboot Spider Man movie that released in 2012, will also be releasing on the same day as well.

While both Hindi films have Sonakshi as a common factor, each have their own pros - namely, the Thuppakki remake will be Akshay's release after a gap of six and half months, while Action Jackson will be the first time pairing of Ajay Devgn and director Prabhu Dheva. On the other hand, the Hollywood flick directed by Mark Webb will witness a 3D release in English, Hindi, Tamil and Telugu featuring Andrew Garfield, Emma Stone and Jamie Foxx.

What's left to be seen now is whether all three go toe to toe in a head on clash or which one of the three blinks first...