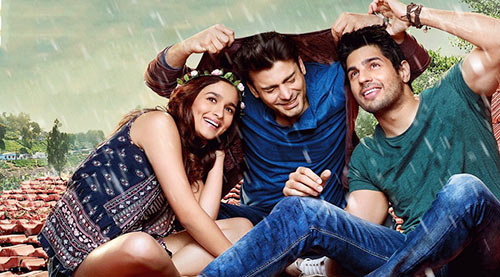 1. The cast. Three generations of a dysfunctional business family played by some of the most charismatic star-actors of Bollywood, from Rishi Kapoor to Alia Bhatt.

This is the only multi-starrer with such a cluttered cast since Karan Johar's Kabhi Khushi Kabhi Gham.


2. Alia Bhatt and Sidhartha Malhotra, said to be a real-life pair, are back together after Karan Johar's Student Of The Year. This time, they share a far more comfortable equation.

And that comfort level shows.


3. Fawad Khan, who plays Malhotra's brother, was last seen in Khubsoorat. He has a huge fan-base especially among married women in India. If nothing else, Fawad will ensure a huge

female following for this family that believes in fighting and flirting together.


4. Rishi Kapoor plays the 90-year old patriarch Kapoor of the family. His makeup was done at a staggering cost of Rs 2.5 crore by Greg Cannom, the multi-Oscar nominated makeup man, who


5. Rishi Kapoor and Alia last came together in Student Of The Year where they didn't have that many scenes together. In Kapoor & Sons, Alia plays RK's grandson's love

interest. And they have quite a few moments of shared warmth.


6. The highlight of the film are the confrontation scenes between the two brothers played by Sidharth Malhotra and Fawad Khan. It is ominous that even in his last outing Malhotra was

caught in a brotherly conflict, with Akshay Kumar in Brothers. Bhai-product of an actor's image?


7. Before we forget, the middle generation in this 3-generation Kapoor saga is played by the amazing Rajat Kapoor and Ratna Pathak Shah. Sadly, the entire marketing effort of the film is

centred on the three young actors Sidharth Malhotra, Fawad Khan and Alia Bhatt, bypassing the generation that would actually be expected to deliver the strongest performances.


8. Real- life couple Sidharth Malhotra and Alia Bhatt share screen space for the second time. Their chemistry is said to be piping-hot. Recent films like Neerja, Jai Gangaajal and

Airlift have gone easy on the romantic interest. Would be interesting to see a real-life pair share screen space.


10. The film is shot in the green splendour of Conoor. The last big Hindi film to be shot there was Vikarm Bhatt's Raaz in 2001. Long-time no see.