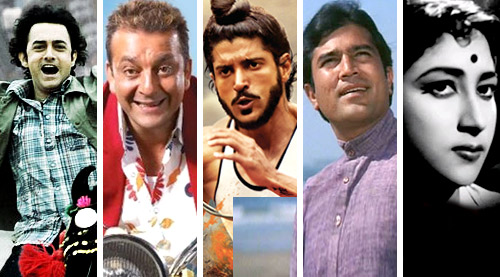 Films were always meant to change the way we look at life. Alas, they seldom do that. Busy as they are trying to desperately entertain us, movies forget their original raison d'etre to raise our level of social consciousness and make us better human beings.


Presenting the 10 films that dared to make us stare hard at the quality of our lives.


1.  Do Aankhen Barah Haath (1957): V Shantaram's gritty prison drama was about an idealistic jailor (played by Shantaram) who runs a unique open-jail to reform hardened criminals. The film and its soul-stirring Bhajan 'Ae Maalik Tere Bande Hum' compelled many changes in the way we treat prisoners, especially on death row.


2.  Pyaasa (1958): Director-actor Guru Dutt's film addressed itself to the disenchantment of the post-Independence generation that found itself facing a moral and emotional crisis brought on by corruption and inept government. Guru Dutt's poet Vijay was an angry but ineffectual version of the Vijay that Amitabh Bachchan later played.


3.  Upkar (1967): Writer-actor-director Manoj Kumar's passionate paean to patriotism sailed to salient summits of human reform on the strength of Lal Bahadur Shastri's slogan 'Jai Jawaan Jai Kissan'. Manoj Kumar played Bharat, who was both a farmer and soldier in the film. This masterpiece influenced hordes of youngsters to respect the farmer's vocation and to join the army.


4.  Anand (1970): Rajesh Khanna's unforgettable performance as the dying do-gooder Anand Sehgal who influences friends and befriends strangers because he believes life is not about size but substance, made such a powerful statement on humanitarianism and bridge-building that for years people used the 'Anand' motto of 'Being Human'. In Hrishikesh Mukherjee's scheme of existence you didn't have to wear the the message of 'Being Human' on your t-shirt. You wore it on your heart. Anand was the human embodiment of Facebook.


5.  Jai Santoshi Maa (1975): An odd choice, yes. But nonetheless a very important film for giving to the nation a new God to worship. In the year of Sholay, Jai Santoshi Maa a tacky low-budget mythological with farcical special effects swept the collective consciousness of North Indian middleclass women. Viewing the film became a form of pooja and pilgrimage. Anita Guha who played Santoshi Maa (plastic halo and all) was seen as a real-life goddess. No pauranic katha on screen has ever made such an impact before or after.


6.  Arth (1982): The plight of the deserted wife touched so many women's lives that Shabana Azmi, who played the iconic role of the abandoned woman who learns to stand on her own feet, is to this day approached by distressed women in search of a home after a rudely terminated marriage. Mahesh Bhatt made no truer film.


7.  Rang De Basanti (2006): Corruption as seen and attacked by a group of angry youngsters (and never mind if one of the 'youngsters' Aamir Khan was 40-plus at the time he did the film) never seemed more eradicable. Rakeysh Omprakash Mehra turned the tale of the vigilante into an extended patriotic anthem. Suddenly protest marches and candle-light vigils became more the norm than the exception.


8.  Lage Raho Munnabhai (2006): Was it a mere coincidence that after this film's release incidents of road rage, neighbourly squabbles and petty crimes were reduced substantially? The jadoo ki jhappi became an accepted form of human empathy. Tragically Munnabhai Sanjay Dutt languishes in jail now, in dire need of some jadoo and some jhappi.

9.  Black (2005): Seriously reconsidering the way we look at the disabled, Sanjay Leela Bhansali's film opened windows and doors into the dark and heedless world of the blind and deaf. Rani Mukerji's rousing role as the disabled and Amitabh Bachchan's bravura turn as her teacher galvanized many institutes for the specially abled to look within. More importantly the film connected the physically disabled with the world of the normal.

10.  Bhaag Milkha Bhaag (2013): A month after its release Rakeysh Ompraksh Mehra's inspirational story of the ace-sprinter continues to create a powerful and durable impact across the nation. 40 years ago when Sholay released moms would scare kids into eating their food with the warning, 'Kha le nahin to Gabbar aa jayega.' Today after Milkha, moms encourage their little ones to drink their milk saying, 'Pee le, tujhe Milkha nahin ban-na kya?'