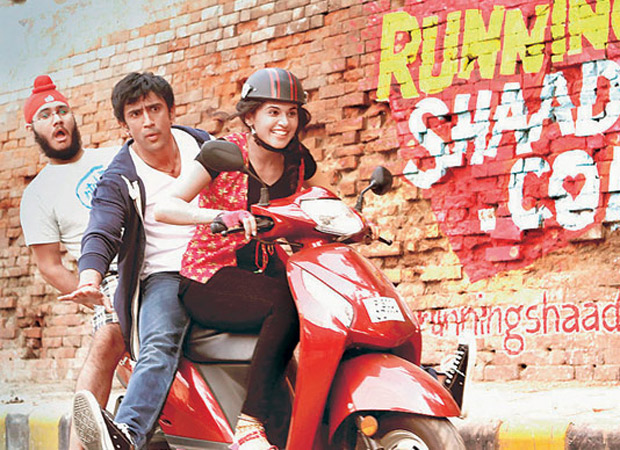 EXPECTATIONS
Since the film has a North Indian setting to it with its base in Punjab, one expects heavy dose of Punjabi influence in the soundtrack of Running Shaadi.com. A bunch of composers - Abhishek-Akshay, Anupam Roy, Keegan Pinto, Anjana Ankur Singh and Sandeep Madhavan - come together to create a song or two in this musically heavy album that has more than half a dozen songs.

MUSIC
The soundtrack begins with a 80s style 'Pyar Ka Test' which has none other than Bappi Lahiri klick-start the proceedings. The song instantly reminds one of 'Main Tera Tota, Tu Meri Maina' [Paap Ki Duniya] which incidentally had music by Bappi Lahiri himself. This time around he steps in as a composer and with support of some wacky lyrics goes all out in front of the mike with company of Kalpana Patowary.

Sukanya Purkayastha, who had sung the female version of 'Paani Da Rang' [Vicky Donor], is heard in a different avtar for 'Mannerless Majnu' which pretty much carries forward the mood and flavor of 'Pyar Ka Test'. With a North Indian milieu to it, this one could well have featured in an Aanand L. Rai film, given the kind of setting that it has. Overall though, this one turns out to be an average outing.

There is a different kind of spunk that is evidenced soon after though once the voice of Late Labh Janjua is heard in 'Dimpi De Naal Bhaage Bunty'. Expect this one to be a montage sequence in the film once the master plan of Running Shaadi.com, as laid down by the lead protagonists of the film, are put into action. With good pace, singing and fun lyrics to it, this one is a good winner and should enjoy a good shelf life.

A different kind of spin off to 'Bhaag Milkha Bhaag' is evidenced in 'Bhaag Milky Bhaag' and somehow one doesn't quite get the sound of the song even after hearing this one repeatedly. At best situational, this one has Sanam Puri taking the lead with Sonu Kakkar as his accompanying partner behind the mike. Strictly average, one waits to see how this fits into the film's narrative.

Jubin Nautiyal gets a couple of songs to his name in the film and the one that arrives first is 'Faraar'. A soft rock outing, this one has guitar as an accompanying factor and suddenly changes the 'sur' of the soundtrack. Though it seems like a rather abrupt, one does get used to its sound as it plays on for a while. Expect this one to play on in the film during a road journey of sorts that is placed in the narrative.

Coincidentally, there are a couple of songs with the word 'Faraar' in there. It is an uncommon word in Hindi film music parlance and hence it is rather surprising to find one again, this time as 'Main Faraar Sa'. Rendered by Anupam Roy along with Hamsika Iyer, this one is a smooth continuation to 'Faraar' that was heard earlier, though yet again it predominantly carries a situational appeal.

Last to arrive is 'Kuch To Hai' which is a Jubin Nautiyal solo. In its spirit, theme and execution, it is in line with the last couple of tracks. With good Western influence to it, this time in the pop genre, 'Kuch to Hai' is also basically situational and has a shelf life which would primarily be restricted to the film's play in theaters.

OVERALL
The music of Running Shaadi.com could well be divided into two halves. While the first predominantly carries a Punjabi flavor to it, latter has Western influences with a soft appeal. In terms of popularity though, it would be songs in the former bracket that would still allow the soundtrack to cover some distance.