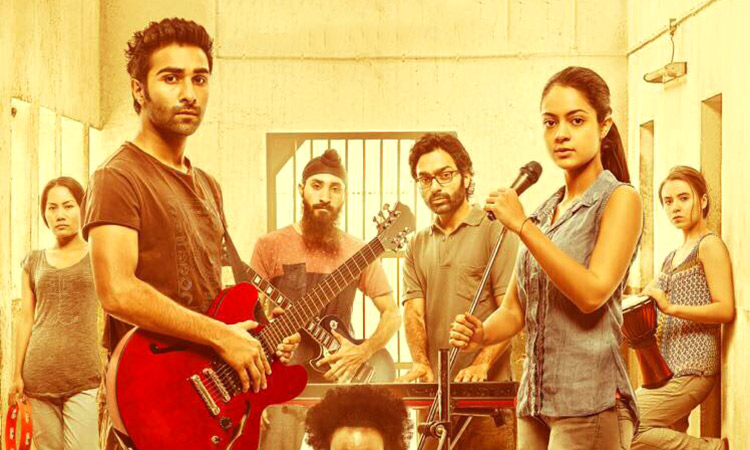 The recent case of the murder of a women prisoner in a Mumbai jail has brought the spotlight back on the inhuman conditions in our jails. Worse is the condition of the undertrials who haven’t been convicted and yet continue to languish in jails, sometimes for double or triple the number of years than the actual sentence of their crime. Habib Faisal’s QAIDI BAND attempts to tell a story of a group of undertrials but adds adequate dose of music and entertainment to make it appealing for the viewers. So do these band members entertain the audiences well or do they fail to put up a good show, let’s analyse.

QAIDI BAND is a story of undertrials who come together to form a band in jail and their music becomes their only hope for freedom. Sanju (Aadar Jain), Bindu (Anya Singh), Rufi (Mikhail Yawalkar), Tatyana (Anna Ador), Cyndy Khojol (Sange), Ogu (Peter Muxka Manuel) and Maskeen (Prince Parvinder Singh) are undertrials in a prison in India. The jailor, Devender Dhulia (Sachin Pilgaonkar) decides to form a band in jail, comprising of both women and men. His idea is to get them to perform on patriotic songs on Independence Day in the presence of a popular politician and earn brownie points. After a round of audition, the aforementioned undertrials are selected. They manage to practice and perform very well. The media covers the performance and thanks to their coverage, their songs go viral and they become overnight stars. This also makes it difficult to get bail as the demand is to continue with their jail performances. How these undertrials then decide to do the unthinkable forms the rest of the film.

QAIDI BAND deserves praise for bringing to the fore the issue of undertrials and the injustice meted out to them. The entire idea of a prison, comprising of different sections for convicts, undertrials, females, males etc is well presented in an entertaining and engaging form. The characters are introduced instantly and within minutes, the jailor announces about the plan for a band. Hence, the film moves swiftly and packs in a lot in 118 minutes. However, for a film like QAIDI BAND, the emotional connect is very important which is missing in this film. Except for the handicapped Rufi, one fails to empathize with any other prisoners. There are lot of unconvincing factors to the film. The songs made by the prisoners aren’t chartbusters or unforgettable types. Yet, their track is shown to go viral and they develop a huge fan base. Bindu is too optimistic about getting bail for no reason and it’s too difficult to digest. The entire sequence where these undertrials escape and what happens later on takes away the realism of the film.

Habib Faisal’s story is weak but the premise is nice. His screenplay is pacy but that’s about it. The content is not worthy and could have been better. Habib Faisal’s dialogues however are simple and sharp.

Habib Faisal’s direction is fine at places and faulty otherwise. It’s fine because it succeeds in giving audiences a peek into the lives of the prisoners and the hardships faced by them. In doing so, it doesn’t get preachy or boring. Rather, it’s entertaining and also enlightening. But the back stories are not properly established and there’s no emotional connect one finds with the lead characters. Faisal should have worked more on this aspect.

Aadar Jain makes a very confident debut. He sounds a lot like Ranbir Kapoor. But this is what one shall notice initially. Later on, it’s his great performance that does the talking. Anya Singh too does very well for her first film. She in fact does better than Aadar. If offered the right project, she can make a tremendous mark as she definitely has the potential. Mikhail Yawalkar is the surprise of the film. His is the only track that actually moves the viewers to an extent. Prince Parvinder Singh and Peter Muxka Manuel are fine in their supporting roles. Sange gets no scope while Anna Ador goes a bit overboard. Sachin Pilgaonkar fails to look menacing. Ram Kapoor (Vachwani) is quite nice in a special appearance.

Amit Trivedi’s music doesn’t make the desired impact. ‘I Am India’ is the only song that will linger in one’s mind. ‘Jag Mag’ is memorable because its shot in just one take while ‘Poshampa’ is relegated to the background. ‘Hulchul’, ‘Udanchoo’, ‘Phir Nayi’ and ‘Junooni’ are forgettable. Hitesh Modak’s background music is lively and ensures the film doesn’t get depressing or too serious.

Anay Goswamy’s cinematography is passable. Mukund Gupta’s production design is nice although it could have been more authentic. But the jail complex is well designed and does look real, especially in aerial shots.

On the whole, QAIDI BAND boasts of some fine performances but the script is average and the developments in the film are too unconvincing. It’s releasing with multiple films tomorrow and due to lack of buzz, QAIDI BAND will face a tough time at the box office.

Such a surprise to see Yash Raj Films and Habib Faisal make something so terribly amateurish, you…

The undertrials of Habib Faisal`s Qaidi Band are clearly not in touch with reality. Beaming with an…