Since October is a Varun Dhawan film, one pretty much expects it to be musical. That said, since the film appears to have an offbeat treatment going for it, you wait to hear what kind of music has filmmaker Shoojit Sircar adopted for his romantic tale. Shantanu Moitra scores music for as many as three songs while Abhishek Arora and Anupam Roy chip in with a song each. 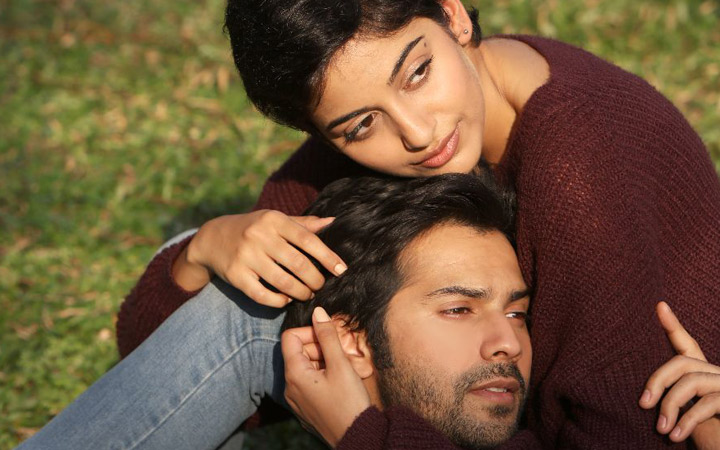 Armaan Malik is the vocalist for 'Theher Ja', a romantic number that is pretty much in the singer's territory. An urban number with a Western base to it, this one has composer Abhishek Arora and lyricist Abhiruchi Chand pairing up to create a lovey-dovey outing. While the number has a soft feel to it, somehow one feels that it would have done better had there been more energy into the proceedings.

Just when one would have expected more songs to follow, there is a surprise in store as a theme piece comes in next. Put to tune by Shantanu Moitra with Rohan Roy playing the violin, this one has melancholy written all over it. Though it should manage to create a good emotional impact in the film's narrative, as a standalone piece it would primarily work for you if you already suffering from a broken heart.

Composer Anupam Roy and lyricist Tanveer Ghazi come together for 'Tab Bhi Tu', a sad love song. With Rahat Fateh Ali Khan as the lead singer, one would have expected a heart touching number. As a matter of fact the lyrics try to get the song into that territory as well. However, the song stays on to be ultra-slow and the impact is not felt either, hence resulting in 'Tab Bhi Tu' bordering on being boring.

Next couple of songs that come have Shantanu Moitra as the composer. First to arrive is 'Manwaa' which is written by Swanand Kirkire and has Sunidhi Chauhan coming behind the mike. Yet again, the song has sad undertones to it and within a matter of a few seconds you realize that this one won't really find a way into your playlist. Yes, there is a classy appeal to it but in the process loses out to the masses entirely. On the other hand 'Chal' has an 80s style pop feel to it and the manner in which Monali Thakur sings this Tanveer Ghazi written number doesn't really make you fall much for it either. Avoidable.

Overall too the album is pretty much avoidable as you don't really take much of it home.