The Fast And Furious franchise started way back in 2001. Since then we have seen the franchise evolve from racing to something that includes, heists, spying and of course fast cars. Now two years after the last release in the series THE FATE OF THE FURIOUS hit screens in 2017, we see a spin off feature film in the form of FAST & FURIOUS PRESENTS: HOBBS & SHAW. But will this new action flick woo the Fast and Furious audience or will it like so many other actioners be all glitz and no content is what we analyse. 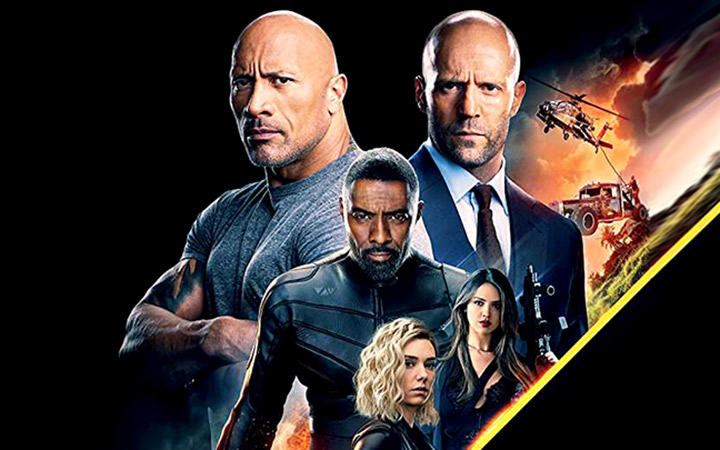 Starting off, FAST & FURIOUS PRESENTS: HOBBS & SHAW is centred around the titular Luke Hobbs (Dwayne Johnson) and Deckard Shaw (Jason Statham), characters introduced in the main series. The film begins with a crew of MI6 agents attempting to retrieve a virus, Snowflake, which can be programmed to decimate millions of people, from terrorist organization Eteon. Brixton Lore (Idris Elba), an Eteon operative with advanced cybernetic implants, arrives and kills all agents except for their leader, Hattie Shaw (Vanessa Kirby), who injects Snowflake into herself as a dormant carrier and escapes. Brixton frames Hattie as a traitor who killed her team and stole Snowflake, forcing her to go on the run. Luke Hobbs and Deckard Shaw are both informed of the missing virus and are assigned to work together reluctantly to track it down. From here on begins a cat and mouse game to save Hattie and the world while keeping the deadly ‘Snowflake’ out of the wrong hands.

Much like the previous FAST & FURIOUS films, this spin off too is an action entertainer that promises edge of the seat stunts, fast cars, and big explosions. While there were initial questions raised whether a spin off on a series like F&F would work and hold the audience’s interest, FAST & FURIOUS PRESENTS: HOBBS & SHAW proves that such films if made well, not only keep the audience in their seats but also provides for a fun filled thrilling watch. Director David Leitch, who has in the past proved his mettle with JOHN WICK (2014), ATOMIC BLONDE (2017) and the more recent release DEADPOOL 2 (2018), has done it again. Thanks to a background as a stuntman with professional martial arts training, Leitch is able to execute and shoot some rather difficult action sequences with precision. Keeping in mind the background of the franchise, Leitch has capitalized on characteristic traits of Hobbs and Shaw to develop seamless fight sequences that are well co-ordinated. As for the story of the film, like most action flicks, this one too features a wafer thin plot. However, it isn’t the plot that is the film’s mainstay; instead it is the eye popping relentless action that is interjected with well-placed humour to break the monotony.

Coming to the performances, Dwayne Johnson as Luke Hobbs does what he does best, which is smashing things. Assisting him on this endeavour is Jason Statham as Deckard Shaw who takes the more refined approach as compared to Hobbs’ brute force technique to eliminate targets with finesse. Vanessa Kirby as Hattie Shaw does a commendable job and manages to hold her own despite the fact that the film is centred on the characters of Hobbs and Shaw. However it is Idris Elba as Brixton Lore who steals the limelight. A cybernetic enhanced superhuman hybrid, Brixton is capable of feats that push the boundary. Despite having such power, Elba’s restrain is clearly evident, thus preventing the film from becoming too over the top. The dialogues, though not much are good in places with well time punch lines that deliver.

As for the action, well it is a spin off from the FAST AND FURIOUS franchise, so expect tons of it. Though unlike the previous films in the series, this one features fewer high end cars, skimpily clad women and debauchery, but rest assured David Leitch has done well with the action. Adrenaline pumping, edge of the cliff (quite literally) gasoline fuelled explosions that are sure to satiate your hunger for destruction.

On the whole, FAST & FURIOUS PRESENTS: HOBBS & SHAW lives up to the FAST & FURIOUS tag, with insane stunts, high octane action, well timed humour and an entertaining rollercoaster ride that keeps you in your seat. At the box office, the film that releases in four languages, English, Hindi, Tamil and Telugu is expected to open well and will see an increase in footfalls over evening and night shows. With little competition at the box office, FAST & FURIOUS PRESENTS: HOBBS & SHAW looks set to dominate the weekend.

Box Office: Fast & Furious Presents: Hobbs & Shaw is decent on Wednesday, to be an overall plus affair