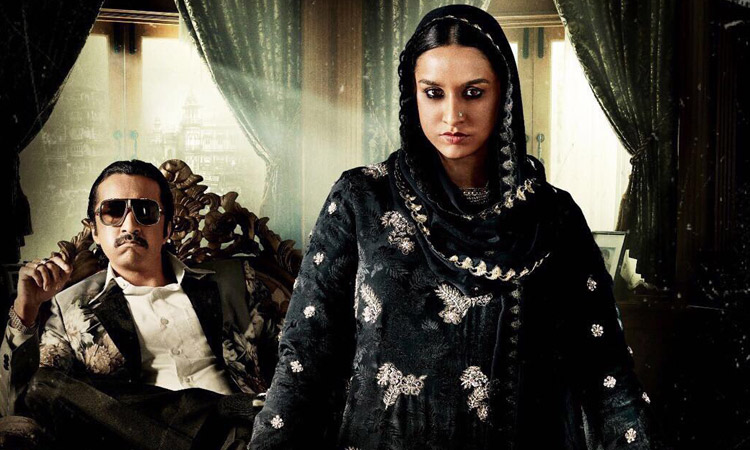 The underworld that ruled Mumbai at one point continues to be captured on celluloid with alarming regularity. Just two weeks ago, audiences were exposed to the life of Arun Gawli in DADDY. And now Apoorva Lakhia is all set to enlighten audiences with HASEENA PARKAR. But HASEENA PARKAR is not just another film on the dreaded gangster Dawood Ibrahim. So do the makers manage to engage audiences with this flick or does it fail to impress, let’s analyze.

HASEENA PARKAR is the story of an ordinary woman who is forced to turn to crime due to circumstances. Haseena Parkar (Shraddha Kapoor) lives with her close to dozen siblings in a small house in central Mumbai. She is very close to one of her brothers (Siddhanth Kapoor) who however turns to crime. Haseena gets married to the kind-hearted Ibrahim Parkar (Ankur Bhatia) and yet, she is compelled to face the brunt of her brother’s actions. As her brother turns big in the underworld scene, his enemies also increase manifold. One of the enemies eliminates Ibrahim Parkar in a fit of revenge. On the other hand, the 1993 serial bomb blasts in Mumbai send shockwaves everywhere. Haseena’s brother emerges as one of the key conspirator in this ghastly crime. But he has escaped to Dubai and again, it’s Haseena who falls into trouble. This is when she realizes that she can no longer be a victim – she hits back and emerges as the only ‘aapa’ in Mumbai underworld. What happens next forms the rest of the story.

The story written by Suresh Nair packs in too much for a 124 minute long film. Suresh Nair's screenplay does not come across as effective. HASEENA PARKAR begins on a nice note and one expects the film to go on a high. Sadly that doesn’t happen. One of the biggest problems with the film is that it gives an overview of the underworld menace and doesn’t explain the scenario to the audiences well. It seems like the makers assumed that audiences are well aware of the enmity of the underworld gangsters. Also the story spans almost 30 years very swiftly and there are too many timelines. This makes the whole experience tedious. There is no empathy for the principal character despite she facing so many difficulties. In fact audiences get confused as certain episodes are depicted but not explained clearly. Chintan Shah's dialogues are average, but at few places the one liners are witty.

Apoorva Lakhia’s direction is not upto the mark. It is indeed praiseworthy that he didn’t glorify Haseena Parkar completely. But it is bewildering to see how some episodes are not fully explained. For instance, Haseena's son Danish (Paras Priyadarshan) gets assassinated and it remains unclear who killed him and why. The same goes with the murder of Haseena's husband. But here one does feel the pain. Shockingly, the 'bhai' is never shown committing any major crime! Moreover, the sequence of Ibrahim Parkar acting in movies looks forced. The courtroom scenes are engaging at some places but otherwise, it gets unintentionally funny with the characters appearing like caricatures.

Shraddha Kapoor does a fairly decent job. At some places she struggles, especially while playing the aged avatar but she puts an earnest effort and it shows. Siddhanth Kapoor however fails to impress as the dreaded gangster. His performance is just not convincing and moreover, his voice seems dubbed. Ankur Bhatia looks dashing and gives a fine performance. Priyanka Setia (public prosecutor) is the surprise of the film. Her dialogue delivery is impeccable and intimidating and it works brilliantly. Rajesh Tailang (defence lawyer Keswani) goes a bit overboard. Dadhi Pandey (Haseena’s father) is fair. The actor playing the judge raises unintentional laughs towards the end.

Sachin-Jigar's music doesn’t get scope at all. ‘Tere Bina’ is the only song in the film and isn’t memorable. Amar Mohile's background score however is dramatic and makes an impact. Fasahat Khan's cinematography is simple and neat. Steven Bernard's editing is nothing special. Sunil Nigvekar's production design and Nida Shaikh's art direction is convincing. Javed-Ejaz's action is passable.

On the whole, HASEENA PARKAR fails to impress as it’s too superficial and unexciting. At the box office, the limited buzz and competition from other releases will prove detrimental.

Box Office: Newton has the best response over the weekend; Bhoomi and Haseena Parkar are low

why making on dons and don sisters why don't you make on army man and police ... make movies on…

why making on dons and don sisters why don't you make on army man and police ... make movies on…