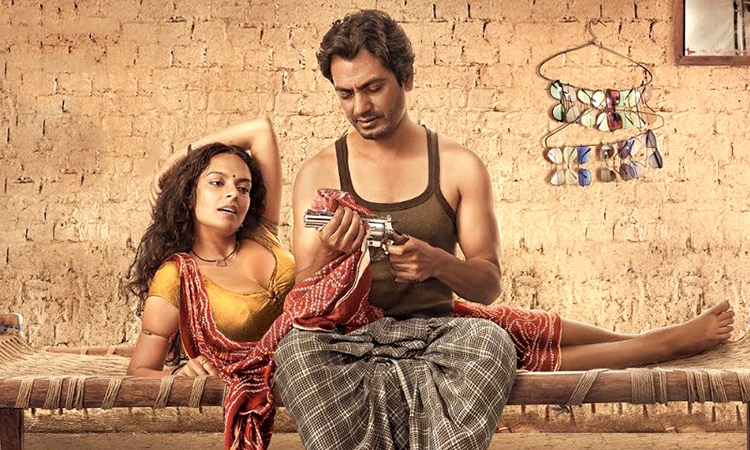 BABUMOSHAI BANDOOKBAAZ is the story of a contract killer whose life takes a drastic turn after he meets his lover and a protege. Babu Bihari (Nawazuddin Siddiqui) is based in a small town in North India and kills people on contract basis. He normally works for a politician Dubey (Anil George) and his rakhi sister Sumitra (Divya Dutta). He meets a cobbler, Phulwa (Bidita Bag) and falls for her and her kickass attitude. He helps her avenge the killing of her rapists and hence she falls for him too. This brings a tiff between Babu and Sumitra. Babu is assigned to kill three people by Dubey, one of them being Sumitra’s right hand man Triloki (Murli Sharma). Assuming that Babu might not fulfil this job owing to his closeness to Sumitra, Dubey asks an upcoming killer Banke Bihari (Jatin Goswami) to do the same job. Babu learns about this double deal of Dubey and he challenges Banke to kill those three guys before him. If Banke manages to kill two out of three, Babu promises to leave the profession. Despite being rivals, Babu and Banke bond very well. How Babu’s life takes a shocking turn by the time this ‘game’ ends and what he does next forms the rest of the film.

BABUMOSHAI BANDOOKBAAZ has some interesting, quirky moments in the first half but the problem is that it's not put together well. This is evident from the first scene itself and especially during the opening credits. The entry of Phulwa and Banke Bihari does spike the interest. Two scenes at this point work very well - the sequence where Triloki is assassinated and the sequence where Babu, Banke and Phulwa dance together. The intermission point is shocking but post interval, the film goes completely downhill. The only formula adopted by the makers after a point is to just shock the viewers but in the process, logic and sense gets sacrificed. There's too much of mindless killings and sex that is not at all convincing.

Performance wise, Nawazuddin Siddiqui is terrific. He gets a bit repetitive and his performance here does remind one of his act in RAMAN RAGHAV 2.0. But no complaints as his performance is fun and he does well as per his character’s demand. There are some emotional sequences as well where he shines. A yet another fine performance from this powerhouse performer! Bidita Bag looks every inch a village belle and maintains a strong position despite the presence of Nawazuddin. She hasn’t really got her due in Bollywood but BABUMOSHAI BANDOOKBAAZ will definitely help her get recognition and popularity. Jatin Goswami also leaves a huge mark. He has a crucial part in the film and he manages to compliment Nawazuddin Siddiqui well. Shraddha Das (Yasmin) is okay while Anil George gets very little scope. His look and his character seemed interesting but due to minimal presence, he fails to garner the desired impact. Bhagwan Tiwari (Tara Shankar Mohan) however manages to register despite a brief performance. Divya Dutta as always impresses. Murli Sharma has a fine performance but again, he is hardly there in the film. Jitu Shivhare (Bhupat) is decent.

Music is poor. ‘Barfani’ is the only memorable song, more for its intimate scenes than the composition. ‘Aye Saiyan’, ‘Ghungta’ and ‘Chulbuli’ don’t work. Anup Bhat's background score is minimal.

Vishal Vittal's cinematography is satisfactory. The small town mood is nicely captured by the lensman. Ashmith Kunder and Kushan Nandy's editing should have been smoother. Kiran Shyam Shroff's production design is authentic.

On the whole, BABUMOSHAI BANDOOKBAAZ is a poor show owing to its incoherent script. At the box office, the film will have to depend on word of mouth togrow.

It's a Raw and spicy;-) movie set on the backdrop of killing contact. The film is one time watch…

A mind blowing excellent performance by Bandookbaaz, Nawazuddin saab batted brilliantly by their…