Last Updated 16.10.2021 | 3:01 PM IST
feedback language
follow us on
Bollywood Hungama » News » South Cinema » As Ram Charan completes 14 years as an actor, here’s looking back at the times he proved that he has a heart of gold

The man with a heart of gold!  Mega power star Ram Charan’s charitable endeavours are unparalleled. Over the last 14 years, he has entertained us, made us laugh and cry, given us fitness and family goals, and also shown us that even though you are a huge mega power star, it is important to stay grounded and humble.  As he completes 14 years in the industry, we take a trip down his charity lane. 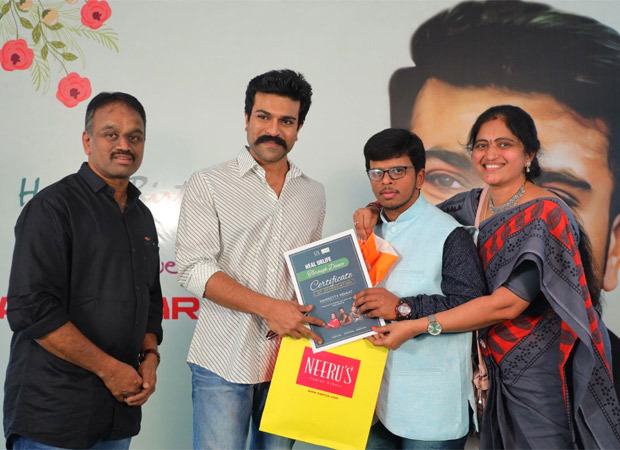 Over 76,000 mega family fans donated blood on the occasion of mega power star Ram Charan's 31st birthday. His fans conduct charity events for him every year. But this year's blood donation camp was different and never seen before in the history of Telugu cinema. Fans across the globe organised blood donation camps in different parts of the world on Ram Charan's birthday. They reportedly organised 250 camps on the day and over 76,000 people from different walks of life visited these booths and donated blood for a cause. His father, Chiranjeevi was awestruck by this massive initiative and Ram Charan also met with all the blood donors and organisers of the blood donation camps, which was declared as a massive success. Ram Charan and Chiranjeevi held a function at Taj Krishna to express their gratitude to everyone responsible for the giant success of the drive. They honoured the donors and organisers of the camps with mementos and gifts for their contributions.

During the deathly second wave of COVID 19, the short supply of medical oxygen has led to the death of several Covid-19 patients. To alleviate the shortage of medical oxygen, Chiranjeevi along with his son Ram Charan, launched oxygen banks across Telugu states. The father-son duo enlisted the services of their fan clubs in each district of the Telugu states to monitor the adequate supply of oxygen to people in need. Ram Charan was the one in charge of the operation.

In 2015, Ram Charan along with Chiranjeevi Charitable trust and Apollo Hospitals, organised a child health camp across the Telugu states and any child suffering from any sort of disease was attended free of cost.