The State government of Karnataka held a grand celebration in Bengaluru on Tuesday to honour late actor Puneeth Rajkumar. On the occasion of the 67th Karnataka Rajyotsava, Puneeth received the highest civilian honour bestowed by the state of Karnataka, the Karnataka Ratna. Superstars Rajinikanth and Jr. NTR attended the ceremony as special guests. 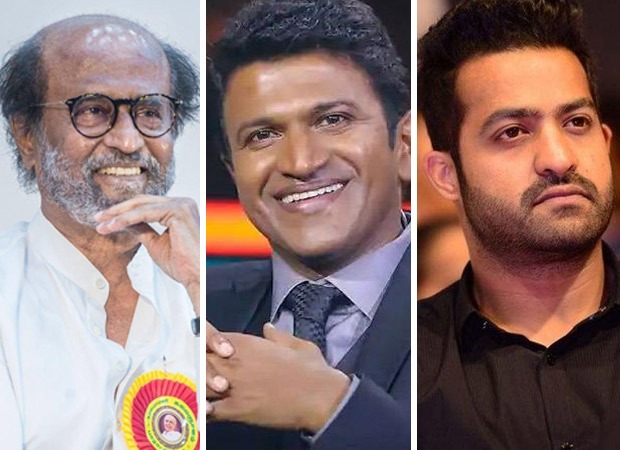 Rajinikanth first shortened his remarks because of the rain. The actor declared that he did not want to keep the audience waiting in the rain. “Everyone must live together in peace, harmony and happiness without the differences of caste and religion. I seek the blessings of Rajarajeshwari, Allah, and Jesus for that,” said Rajinikanth in his speech as per a report by Indian Express.

Later, Rajinikanth called Puneeth Rajkumar "God's child" and compared him to a number of heroic legendary figures. Next up was Telugu actor Jr. NTR, who charmed the audience by speaking Kannada with fluency. The actor made it clear that he was not participating in the occasion in recognition of his acting prowess, to honour his Puneeth Rajkumar's friendship.

Jr NTR added, “A person inherits family legacy and surname from his elders. But, individuality has to be earned. If there is anyone who has won over an entire state with just his personality and smile sans ego, arrogance and war, it’s only Puneeth Rajkumar. He’s the people’s superstar of Karnataka,” in the event.

He further added, “A great son, a great husband, a great father, a great friend, a dancer, and a singer. And above all these, he was a great human being. The wealth in his laughter cannot be found anywhere else. That’s why he’s called the king of the smile. That’s why he’s getting this award. But, don’t mistake me. According to me, Puneeth Rajkumar is the very definition of Karnataka Ratna.”

For the unversed, Puneeth Rajkumar died on October 29, 2021, at the age of 46 from a cardiac arrest. Puneeth’s wife Ashwini accepted the honour at the event.