Fans of Allu Arjun would be aware that the actor has always given utmost priority to it in his personal and professional life. Marking the auspicious occasion of Ganesh Chaturthi, Allu Arjun welcomes Lord Ganesha to his office and celebrates it with his staff in a grand manner. This year was no different and it was all about cherishing and enjoying together. In fact, the humble actor stepped down to enjoy the ritual of Ganesh Visarjan with his people. 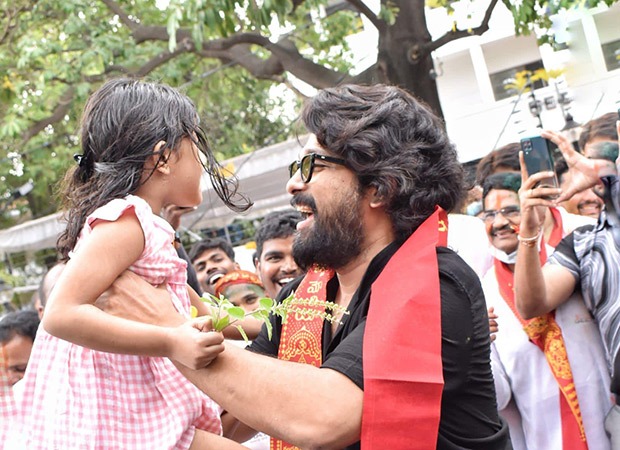 A recent video that went viral shows Allu Arjun enjoying Ganesh Visarjan with his team. A source close to the actor said, “Allu Arjun did not even hesitate to get on to the road to celebrate. He even broke a coconut as a ritual, as he bid farewell to the Lord. Moreover, he was also seen encouraging Arha to be a part of the procession so that she can witness the immersion closely, and learn about the importance of the festival. And the father-daughter duo looked as adorable as they were seen holding Arha in his hands. He always had a keen passion for understanding cultures and heritage,” concluded the source.

After the success of Pushpa at the beginning of the year 2022, the shooting schedule of his highly anticipated Pushpa: The Rule has already started. The actor is also expected to be nominated for several accolades this year with the immense success the film has tasted. Besides that, Allu Arjun also had some interesting collaborations including one with a Korean pop band. Amidst actors like Vijay Deverakonda making their Bollywood debut, we wonder if this actor plans on entering B-town too.