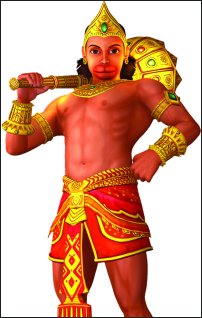 The Indian gaming industry has now crossed the platform barrier. In a first, Sony Computer Entertainment Europe has launched Hanuman: Boy Warrior (3D) for the PlayStation 2. Developed by Hyderabad-Aurona Technologies Limited (acquired by Pyramid Samira), Hanuman is the first localized game on the PS2 platform to be completely developed by an Indian game development house.

It is also Sony's first game based on Indian mythology and one that is playable in Hindi.
The launch of the game is a culmination of a journey that was started by Sony when the first ever game developers' conference (DevStation '08 Mumbai) for Playstation platform was organized in Mumbai.

Santosh Pillai, CEO of Aurona Technologies Limited, said, "We have created the console game to capture the hearts and minds of India's current and aspiring game players and their families. Immersive game play is at the heart of this fascinating game. Using the PS2 console, the player helps the hero to fight evil-doers at several mystical landscapes of the epic period. We believe the game has the necessary ingredients to become a classic."

The game is the journey of Hanuman across two phases of his life: childhood and young adulthood. He faces many obstacles and enemies on the way and uses his powers to overcome the same. Developed exclusively for PS2, Hanuman: Boy Warrior will be available in the Indian market at a suggested retail price of Rs 499.