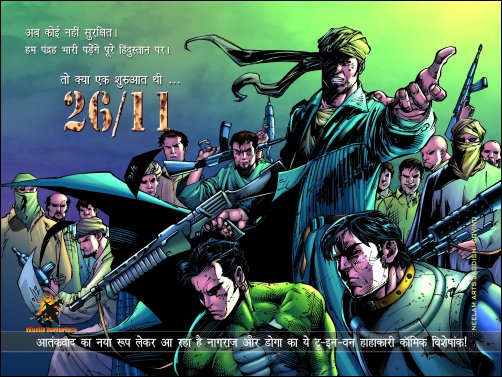 Raj Comics, one of India's most popular comic publishers, is foraying into the motion-comics space with the release of 26/11, a special edition comic starring superheroes Nagraj and Doga. The motion-comic and comic book will both be released in the first week of May.

An emerging worldwide trend, motion-comics are a cross between comics and animation; incorporating simple animations, voice-overs and background score with original comic frames.

Speaking to Bollywood Hungama, Raj Comics Studio Head - Sanjay Gupta said, "This move is targeted at tapping the existing fan base and others who will now be able to access content on their mobile phones and PCs. We have plans to convert our entire library of 3000 comics into motion-comics." The first set of motion-comics, 26/11, Halla Bol and Omerta are currently under production at a Delhi-based studio.

Talking about 26/11, the print edition of which runs into 80 pages, Sanjay said, "The story takes off from where the 10 terrorists are killed and captured by the Mumbai police. In the comic, Nagraj and Doga foil a bigger conspiracy that follows the terrorist attack.."

The company is currently in talks with various distributors for leveraging content on the mobile, web and TV platforms. It also offers around 500 downloadable e-comics.