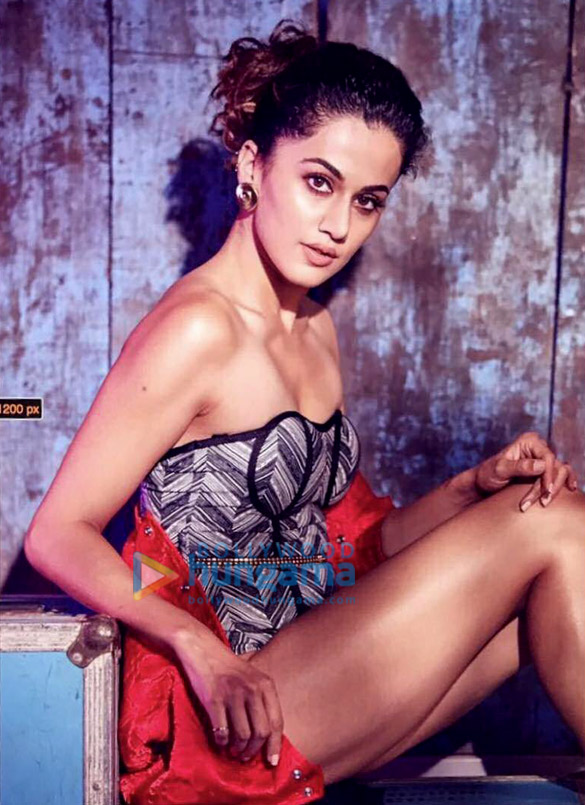 Taapsee Pannu was always seen as cute and gorgeous actress in Bollywood despite doing gritty, intense roles like Pink, Baby, Naam Shabana etc. But she had a hot, glamorous side that was lying dormant, at least in Hindi cinema. It finally became known when she signed Judwaa 2. Taapsee was seen wearing bikini and had a sizzling avatar throughout the film. And she carried it very well, earning loads of praise from her fans.

Taapsee Pannu’s latest picture takes forward her sizzling avatar. It features her wearing a tiny one-piece off shoulder swim wear and she has complimented it with a short red jacket. She has kept her hair tied, flaunting her toned legs. Her pose seems quite candid and from the caption, it is evident that it’s a screenshot from one of her photoshoots. The caption reads, “Sometimes the best moments stay untouched, unedited...... and unused...... #RawImage #ScreenGrab”

Taapsee Pannu made her cinematic debut in 2010 with the Telugu film Jhummandi Naadam. In 2013, she did her Bollywood debut with David Dhawan’s comic caper Chashme Baddoor. Two years later, she was seen in an action avatar in Baby. In 2016, she was praise for the courtroom drama Pink. Earlier this year, she acted in Naam Shabana, a spin-off from Baby, and later in Judwaa 2. Her upcoming film is Mulk, co-starring Rishi Kapoor.