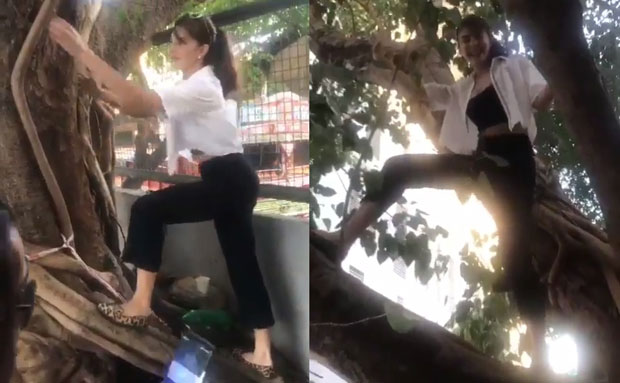 Jacqueline Fernandez has developed a huge fan following due to various reasons. A section of her fans love her for her hot and sizzling side. But there are many who admire for her cute and goofy side. The actress is always seen happy, laughing heartily and even goofing around in the making videos or media appearances. This endearing quality has earned her a lot of respect.

A latest video that’s come out shows the goofy and entertaining side of Jacqueline Fernandez. It features Jacqueline climbing a tree as asked by her Drive director Tarun Mansukhani. The actress does so carefully but not before her sunglasses fall off! She finally reaches a branch where she balances herself carefully and then gladly dances. Then she is asked to come down. Jacqueline is seen thinking how to climb down and that’s where the video ends. We wish the video had not ended abruptly and we would have to love to find out if Jacqueline jumped, that she was probably contemplating, or did she take help from her team.

The video clip however was not shot for the heck of it. Tarun Mansukhani, who posted the video, asked people to post similar videos of themselves – climbing trees and then dancing – all for the love of trees. The person who posts the video gets a chance to meet Jacqueline Fernandez as well as her Drive co-star Sushant Singh Rajput. The winner will be declared on October 27.

Drive is produced by Karan Johar and is all set to release on March 2, 2018.