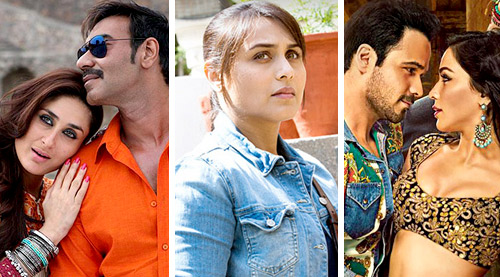 So far the box office has thrown forward only a handful of blockbusters including the Salman Khan starrer Kick and the Akshay Kumar actioner Holiday.


This August could prove a game-changer for the year 2014 in the film industry, as three very different films that are big in their own separate ways, are being released in three consecutive weeks.


First off the shelf this Friday is Singham Returns, the sequel to Rohit Shetty's 2011 hit, about a gritty incorruptible cop's fight against corrupt forces. The Devgn-Rohit Shetty combo, besides the long Independence Day weekend, are expected to rake in the big bucks.


The following week there is Rani Mukerji's cop act in director Pradeep Sarkar's Mardaani. It is Rani Mukerji's do-or-die effort and her first attempt at hero-giri after marriage. Would Rani be able to break the mythical box office barrier imposed on married actresses? Aishwarya Rai Bachchan, Kareena Kapoor and Madhuri Dixit have all seen a slump in their fortunes post marriage.


Finally in the last week of August, there is Emraan Hashmi's 'con'-banega-crorepati act in Raja Natwarlal. Hashmi and director Kunal Deshmukh had laid turkey called Tum Bin. So....


Would these three films collectively make an aggregate of more than Rs 500 crores?


Trade expert Taran Adrash is uncertain. "It's a bit difficult to put a figure. But these three films could emerge game-changers since the buzz about them is high."


Taran feels the three films have an impressive roster of talent to boast of. "The names starring as well as backing these projects enjoy an enviable following among the audience. They will help fetch the films a flying start."


Amod Mehra is less gung-ho about the triumvirate of August releases. "Singham had barely crossed Rs.100 crores. If good Singham Returns can do more business. Mardaani being a female-oriented cop movie is neither targeted at male nor female audiences. Even if it is good the collections won't cross Rs.50 crores. As for Raja Natwarlal, Emraan Hashmi is an average draw. If the content is good then the collections might go to Rs Rs.70 crores."


Adds exhibitor-distributor Anil Thadani, "I wonder of the accumulated collections of these three films would be anywhere near what Kick has collected! There is a lot more at stake in Kick, Happy New Year and PK."