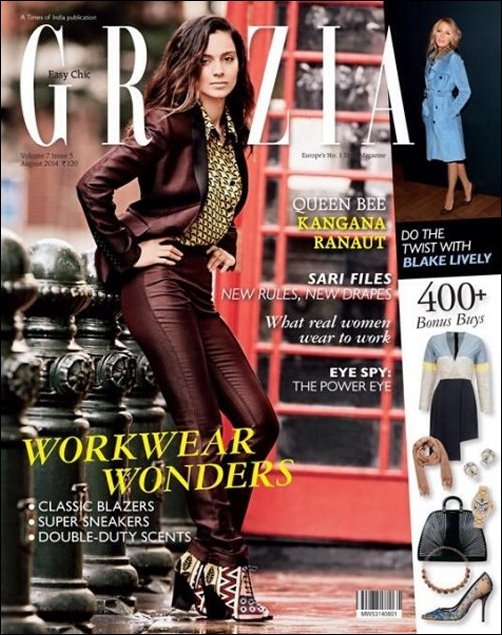 Kangna Ranaut who made her Bollywood debut with the 2006 film Gangster has since gone on to feature in a number of films and has even won numerous awards for her performance. However, it was her recent releases Queen and Revolver Rani that shot her into the spotlight. Well, the actress who will soon be seen in Ungli features as the cover girl for the fashion magazine Grazia for the month of August.


Interestingly, for the cover shoot Kangna dons a H2T Burberry pant suit with chunky high heels, a look she replicated from an earlier outing at the HT Most Stylish Awards. However, despite the repetition Kangna Ranaut manages to strike a rather photogenic pose. If that wasn't enough apart from featuring her on the cover, the magazine also features an article on her titled, 'Queen Bee, Kangna Ranaut'. Besides Kangna, the latest issue of the magazine also features pieces on workwear wonders, new drapes for sari styles, and a special on dressing like Blake Lively.


As for Kangna, the actress who has till now had a brilliant year, will be seen in Rensil D'Silva's Ungli, post which she has a lineup of films that include the Indo-French venture Divine Lovers, Tanu Weds Manu sequel and Katti Batti.