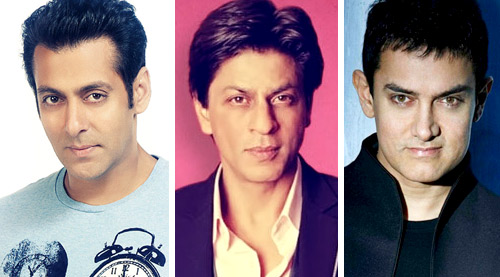 Let's come straight to the point. This is Showbiz, and when there is a show in progress, business factor cannot be ignored.

Not for enemies, not even for friends.

So if Shah Rukh Khan and Salman Khan end up hugging each other, it is a reason for one and all to heave a sigh of relief. After all, who wants to enter a camp business where there are more losers than gainers? However, if one ever thought that professionally it would change anything for the two Khans; it is a solid case of being truly mistaken.

When hundreds of crores are at stake and deals worth fortunes are being signed, it is foolhardy to believe that there would be sudden resurgence of the kind of friendship that would make one of them open the slot of his Diwali outing and another would let him have a stake on his Eid release.

Being courteous is good, Being Human is even better; being naive is out of question!

And not even friends would extend such a favour.

This is where the billion dollar question lies - 'Can this Khan war be left out of the bigger picture when it comes to the future of Bollywood?' The answer is no. Let us explore why!

It isn't an end yet.

Both Shah Rukh Khan and Salman Khan have been around for a quarter of a century each. However, the way they are currently going, plans are well in place for them to play leading men for another half a decade at least. While that would bring them comfortably on the other side of 50, it hardly means a thing when it comes to calling the shots in the industry. If Shah Rukh Khan has created a business empire of his own, Salman Khan has millions of fans and followers on his side.

They owe it to them, and a hug won't come in way of their short and mid-term plans. Shah Rukh Khan would still want his Happy New Year to enter the Rs. 300 crore club. Salman Khan would still want to take forward his winning streak of seven centuries in a row. Meanwhile Salman would be happy to call Shah Rukh the 'King' and Shah Rukh too would reciprocate that with a humble gesture.

That's being gentlemanly for sure and thank goodness for that. However, when it comes to their professional outings, it is going to be fight for the best amongst the best. Best films, best audience response, best commercials involved, best status in the industry.

Do not expect a duet on the lines of 'Chal Ghar Jaldi Ho Gayi Der'. This 'jodi' of Raju and Veeru isn't done yet. They may have settled their personal scores but when it comes to business, they are keeping a close track of each other.

They should. Why not? After all, greed is good, and so do believe many an ambitious personalities who have made it big in their lives!

Don't frown, don't complain, it's natural, and it's fair

Many threw a fit when Shah Rukh Khan decided to make his presence felt strongly on twitter when Kick just opened on that particular morning. 'Arrey yaar, yeh waapas war shuru ho gaya' was the cry in action when Shah Rukh invited people on Twitter to interact with him even as loyal 'Bhai' fans were trying to know about Kick's opening. You know, these days 'aam junta' is all the more interested than even trade and industry when it comes to box office matters. But then well, that's a topic of another day!

On this topic, it seemed that Shah Rukh was in a hijack mode. Well, perhaps he was, perhaps he wasn't. Not that he went to Twitter for the first time. After all, he has been a regular on the circuit for years now. And even if it was deliberate, do refer the section above. All is fair when it comes to business and if Shah Rukh felt that bringing online audiences on his side was a good 'move' (if one is impolite enough to call it one), so be it.

Tomorrow, on the day Happy New Year releases, Salman Khan too could bring on a chat to talk about Sooraj Barjatya's Prem Ratan Dhan Payo. It is a free world and no one should complain.

As for those wondering if Shah Rukh's idea of organizing a big event for Kidzania on the day of Kick music release resulted in time management issues for media then well, it is the latter who need to answer that. Any corporate worth its salt has a risk mitigation plan in place and when two big events take place simultaneously, it is prudent that there is Plan B in place.

Note to media: If you don't have one in place already, draft it NOW. The volume of stars has (fortunately) increased and with the younger ones breaking into Top-10, the world is going to get much bigger than the space that Shah Rukh v/s Salman war is currently occupying.

Aaah, so do people still believe in any of this? I mean the ones who are well into their late 40s actually sitting and plotting the downfall of a friend's rival who actually hasn't done anything to you as yet? It is funny to say the least when Aamir Khan is said to be sabotaging (now that's the word used, right) Shah Rukh's plan just because he is friends with Salman Khan!

Are we talking about 15 year olds here?

These are men, who have their own business to take care of. In an engaged life that they live, it is difficult to imagine them sitting over a drink and drafting a plan to destroy someone. Puhleeze, they have a life, they all do, and the man in the middle of them all incidentally has a near-triple century to his name. That too in a double role no less.

Oh yes, no points for guessing that I am talking about Aamir Khan here.

With a happy life that he is living (well, so happy that is even willing to pose in nude for promoting his next), the last thing he wants is to let his 'perfectionism' be hampered by any sort of negative energy whatsoever. Oh yes, he may urge ushers to wear a Ghajini haircut during the screening of Rab Ne Bana Di Jodi. But please, that was in select theatres and was not quite an all-India phenomenon. I saw the Shah Rukh Khan starrer twice and didn't quite encounter any such man in the aisles staring at me with a Ghajini look.

Of course conspiracy theories would always be there. So when 'sources' (aah, how much we love them!) claim that another poster (possibly with a fully clothed Aamir Khan this time around) is all set to be unveiled around the same time as the promo of Shah Rukh Khan's Happy New Year, it by default leads to lip smacking scoop in the making. After all, in the times of 'Veere Di Wedding' also enjoying 'Twitter Pe Trending', it is but natural for the big guns to get into 'Hamse Badhkar Kaun' mode in an online world.

'Just a poster of ours got more views than their promo' could well become the talk of the town if at all that happens successfully. Or it could even be vice versa. One never knows! There is always a chance of backfire. But then someone out there is taking a risk. A big one at that!

We just saw what happened when the teaser of Bang Bang arrived just few days after full-fledged promo of Haider! Both films are releasing on the same day. 'Jaane Hoga Kya'? Well, check out the responses online and one can pretty much sense how this 'clash' is already being looked at.

There it was Hrithik v/s Shahid. Here it Shah Rukh v/s Aamir. The stakes are high and the dice has been rolled.