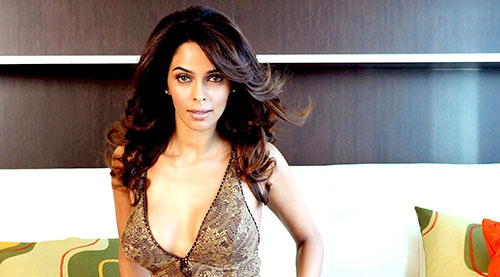 Almost 30 months after her last Hindi film K.L.P.D. [Kismet Love Paisa Dilli], Mallika Sherawat is returning to the Bollywood scene with Dirty Politics. Inspired by a true story of power games, deceit, seduction and murder, the film is an author backed opportunity for Mallika who plays the central protagonist. With close to dozen odd notable names from Bollywood coming together for this volatile political social drama that has been put together by veteran filmmaker K.C. Bokadia, it is Mallika's moment of pride to be holding center stage amidst all.

How does it feel to be making a comeback with Dirty Politics?

I am so happy to know that I was missed (smiles). Most of the times I get these glam item songs and all. However, Dirty Politics is different as playing glam is a secondary thing in the film. Basically, it is inspired by the real life scandal and I am glad to have got an opportunity to play a real life character from Rajasthan. She is someone who is ambitious and can do anything to be the Chief Minister of the state. There is nothing that can stop her. I thought it was the perfect film to be associated with.

How did you prepare for the part?

You know, when the film was first narrated to me, I was of course excited. Still, I wanted to think about it a little since the content has been way too bold. Yes, I have always done bold roles and am actually one of those few actresses who can do bold roles with lots of dignity. That's the reason why Mr. Bokadia came to me. Still, I requested for the script. When I read it, I was fully convinced. This woman I am playing is someone who is not at all apologetic about using her body. I liked that.

The film was delayed for a while though. Wasn't that a frustrating period for you?

It wasn't delayed purposely or intentionally. See, the film has such a huge star cast and there were sequences when all actors had to be together. Sometimes Naseer's dates were not there, sometimes Om's and sometimes I was in the U.S. The film was pushed a little because of that. It was just the date thing and coordination amongst actors; that's about it. There were no other reasons.

The film also requires you to get into some cuss words, expletives and some straight mentions. Did that unnerve you at any point in time?

The director convinced me that this is a lingo and language that politicians use. Besides, I am not playing a sophisticated woman but an angootha chaap girl. Moreover, isn't this a real everyday language? So why are there double standards? When a hero uses such language then we say - 'Waah, kya dialogue maara hai!' For woman, it raises a lot of eyebrows? Why? Aren't we in the 21st century?