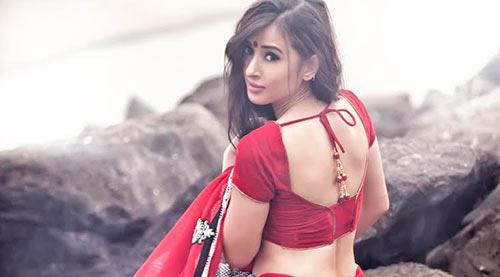 Tell me about your background. What made you decide you wanted to be an actor?

Well I am from Bhilai in Chattisgarh. My mother is half Russian and half Ukrainian designer and my dad is Bengali he is an engineer. So grew up having the best of both worlds and knowing a few extra languages is always a perk. Since school I was always inclined towards dance and theater but since I was a good student was always pushed towards science... But then I decided after school and came to Pune for my higher education and that's when a reality show happened. After finishing my MBA I went to Mumbai got selected on my first audition for an ad and faced the camera for the first time and that's the day I knew I wanted to do this for the rest of my life.

Did Badmashiyaan choose you? Or was it the other way around?

Yes, Badmashiyaan chose me as this is my second film with director Amit Khanna. In fact, when I heard the story I thought he wanted me to do "Palak" because that character was a little closer to what I did in our first film. But the moment he said he wanted me to play the character named Naari I burst out laughing ... But he was dead serious and I agreed immediately...

As a newcomer, what are the hardships that you had to face while doing your first film?

Well, my character is a con girl in the film but I look at it as a girl of today who Is so ambitious that nothing else matters to her ... I had to really come out of my comfort zone and do things I have never done before like picking a fight with a stranger, pulling pranks on everyone around etc. But the most challenging thing about "Naari" was that she is free of complications unlike me ... She truly believes she is always right and runs away from any kind of emotional drama. I had to really fall in love with "Naari's" imperfections.

How was your rapport with your co-star?

Well, I am close to Sidhant Gupta as I've known him for years now and we did our first film together. He is a good friend. Gunjan Mehra is a lovely girl and a very talented actress. We hit it off immediately. Sharib Hashmi is the most humble actor I have ever met and he would always me laugh. Karan Mehra is full of energy and is super spontaneous. Had so much fun in my scenes with him.

Invariably, when two newcomers work together they are linked romantically by the tattle press. Should one presume that you two are more than good friends?

Sidhant and I are friends

Was it tough getting familiar with one another? Are you naturally gregarious?

Well, being a part of such different cultures while growing up definitely makes you very adaptable ... So I can say that yes I did have a different but good rapport with each one of them.

What was it like working on Badmashiyaan. Describe some fun moments during shooting.

It was an amazing ride. We started shooting this film in November and already we are releasing it. Working with my director Amit is always a laugh riot. We have so much fun on and off sets. There were so many pranks that were played like Sharib's ' kiss ka kissa' where Sharib believed that he had to kiss me on screen but I created a huge issue and made him panic.

What and who are your favourite films and filmmakers? Whom would you like to work with in the future?

Do you think Bollywood is accommodating enough when it comes to new talent?

It's definitely hard when you are a newcomer and an outsider, specially to get that first good break is never easy ... But all you can do is ask yourself one question whether you love performing or the rush which you get the moment you hear action ... If yes then it's all worth it.

Every moment that I am performing is in some way unforgettable ... But the day I saw myself on the silver screen for the first time sitting next to my mom, it was very special

Favourite compliment: "You are so different on screen"

Your first kiss: "When I was two I kissed my three year old friend"

Your first date: didn't know what to talk about "


Whom would you like to be marooned on an island with?

"Hopefully, for now, by no-one...anyways I love traveling alone. Don't want any distractions at the start of my career (I do have this huge crush on Will Smith though )"

When was the last time you cried?

A film or a dinner date: "A film followed by dinner ".

Your definition of full-on Badmashiyaan: "Well life is not worth living without fun and mischief ... Badmashiyaan all the way"