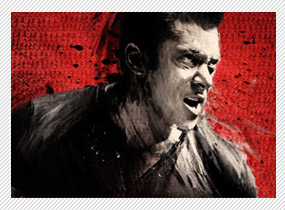 Jai Ho released this week and there are some understated gems in this film that Bollywood Hungama would like to share with you!

What ‘Jai Ho’ taught us!

1. You can kick a soldier out of army but you cannot eliminate patriotism out of an army man

2. No wonder, jab help ki zaroorat padhe, toh army man's superior will make an entry. Out of nowhere... On a tank... And start firing away on a busy road filled with civilians!

3. It doesn't matter if there is a dagger on your back. If you are Salman Khan and want to be bare chested for a scene, it just comes out with the shirt. Just like that!

4. If you want to say 'paagal' to a man in Gujarati language, feel free to spell out loud G.A.N.D.O. Don't think dirty about other connotations as there is one for a lady 'paagal' as well - G.A.N.D.I.

5. If blows, kicks, swords, bullets, nails, pens, tanks and other weapons of mass destruction run out, Salman will just throw his bike in motion on the villain. A kid, who is just centimeters below the villain's head, be damned

6. Meanwhile a villain can bring 100, 200 or even 500 goons to attack Salman. Numbers don't matter as a single 'dahaad' from him with a punch or two on the closest 5 goons is enough to make other 495 run away.

7. An entire sequence - that of an injured politician being whisked away in ambulance with the hero fighting off the villains simultaneously - can be lifted from Sunny Deol and Guddu Dhanoa's Ziddi without much ado.

8. When a Home Minister's influential daughter goes out for a casual visit to the town, she blocks traffic for hours and rest of the world just falls apart.

9. Commoner girls need to beware of their family doctor though. After all, he can stalk you with your deepest secrets from a phone booth while dressed up as a tapori for the occasion.

10. You liked this article. Don't just say thanks. Forward, Retweet or Share with three more people today. And ask them to do the same to three people each. Dil ko bahaut sukoon milega!