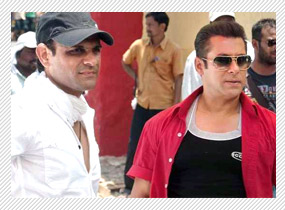 Salman Khan's latest release Jai Ho, got off to a less than expected start. While the film has been steadily growing since its release, the actor seems to be liking his new found image of the 'People's Man'. Apart from this, another aspect of the film that Salman is pretty kicked about is the opening collage of the title track of the film done by Sumit Dutt.

Sumit, who is known for his unique and visually spectacular style of direction, as seen in songs 'Character Dheela', 'Dhinka Chikka' and 'Desi Beat', did it again with Jai Ho. In fact keeping in line with the film's positioning of 'people's man', the song had been given a concert feel with Salman on stage surrounded by thousands of fans. The highlight of the song is it's opening where Sumit shot hundreds of regular Indians saying 'Jai Ho' and merged the images to form Salman's face as the backdrop of the stage.

This unique opening not only looks stunning but also is Salman's favorite part of this catchy song.