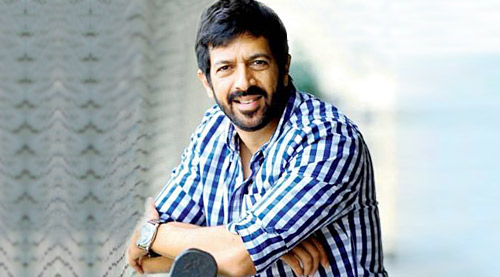 "When Shah Rukh was talking about the issue, he didn't utter the word Pakistan. No reference to Pakistan. First thing is, Pakistan chale jao. Oh he's the same as Hafiz Saeed. What is that man talking about," said a visibly agitated Kabir Khan in a Bollywood Hungama video interview with Content Head Head Broadband Faridoon Shahryar. "A lot of talk has happened about this intolerance issue in the last two-three months with historians, filmmakers protesting, lot of people are saying there is no intolerance, but the fact is that there is intolerance," Kabir said. "Any form of dissent is being looked at as being Anti National. If you follow this line then you're being patriotic and nationalistic, otherwise you're not. It is stupid. There is a big difference between being patriotic and being jingoistic," Kabir said in a matter of fact manner.

You have said recently that you chose to take the subject of Bajrangi Bhaijaan to Salman Khan because of his secular leanings.

What I was talking about is that post Ek Tha Tiger; I spent a lot of time with Salman. I realized he had strong views, opinion about certain issues, one of them being the secular fabric of India. Over the past few years, the social fabric is being stretched, tattered at places. I thought that he feels so strongly about this issue but it hasn't been articulated properly in any medium. When a superstar like Salman throws his weight behind a certain subject then the reach is very wide. You can make a small film about such issues but unfortunately it becomes preaching to the converted. You don't really reach the audience that you need to. When I took the subject of Bajrangi Bhaijaan to Salman, and he reacted so positively to it, I knew that this will be a significant film. Taking the context of what is happening in our country right now, to have Salman, a film that talks about tolerance, love across communities, bringing down artificial boundaries (not only in terms of India-Pakistan, but the borders within). What was more important for me was the border within, first half of Bajrangi deals with that, the preconceived notions (about communities), the intolerance that we are going through, that is why I was so happy that Salman was so excited that he put his weight behind it. He decided to produce it.

You are talking about secularism but a few instances that we've seen in the film industry when Aamir was targeted post the release of PK just because he belongs to a particular religion. Almost immediately post the release of Bajrangi Bhaijaan, Salman was targeted when he tweeted on Yakub Memon hanging and there were ugly protests outside his house. Shah Rukh Khan recently spoke about the secular fabric of India and he was torn apart by certain groups in the most unsavory manner. No one at the top really condemned it. Does it bother you?
Absolutely! A lot of talk has happened about this intolerance issue in the last two-three months with historians, filmmakers protesting, lot of people are saying there is no intolerance, but the fact is that there is intolerance. As a normal common man of India even I perceive it. I know the sort of hate mail I get, the sort of tweets I get, I know the sort of people who target me because of my Muslim identity or target my wife because she married me. To say that intolerance is not there is rubbish. It is definitely there. We've seen it in the case the way Aamir, Salman and Shah Rukh have been attacked. And not just them, across the board we are definitely seeing a certain section that is ready to pick certain issues and become pretty ugly and nasty about it. There is no attempt to control these elements. It is time that people who have certain weight in civil society they must speak up about it. I am glad people are talking about it.

People like Kundan Shah and Dibakar Banerji have been targeted for returning their national awards. A bizarre argument is being given for their action is that, "aap tab kahan the jab..."

That is ridiculous which means that if you haven't spoken up then you don't speak up for the rest of your life. You speak up when you feel the need to speak up. Sometimes what happens is that a lot of things lead up to your patience being tested and then you speak up. A lot of fuss is being made about the form of protest. It is not about the person giving back the award. Let us not discuss that. Let us discuss what they are talking about! The core issue is what are they talking about? They may do it by returning awards, walking on the street, by doing interviews. The important point is what is the issue at hand? You go on a tangent when you talk about the form of protest.

The Ghulam Ali concert being forcefully cancelled, Pakistani actors being asked that they can't shoot or promote their films In India. Don't you feel hatred will only breed hatred?

It is completely unnecessarily. It is rhetoric. We really need to keep culture, art, and any people to people exchange away from politics. Play politics at a certain level. But the moment it starts getting into the way people exchange ideas, culture, musicians coming here, we going there, it really needs to be kept apart. Ultimately we will move forward when there will be more people to people exchange. When it comes to politics, unfortunately we will keep going at it for years and years. I think what will bring the two countries closer is that there is a lot of people to people exchange. Like in Bajrangi Bhaijaan, my whole point was that when a common man from the street of Chandni Chowk goes up to meet Chaand Navaab on the street of Pakistan, there is bound to be friendship and warmth. That is very important. Unfortunately people to people exchange between India and Pakistan becomes victim of politics between the two countries. The moment there is a terrorist attack, the entire atmosphere gets so vitiated, that nobody dares to extend the hand of friendship. It is important to make the distinction between who are the people who are carrying out acts of terror and the general public. That distinction is important. Even media at times makes it Us and Them. We can't look at a country as an amorphous mass. We are suffering here, they are suffering there. There needs to be a sense of balance.

In most of your movies there is a strong sense of nationalism especially Phantom in recent times. Do you feel that today the definition of Patriotism is being distorted? If you are not adapting a certain line you are labeled as Anti National. Do you find it disturbing?
It is disturbing. Any form of dissent is being looked at as being Anti National. If you follow this line then you're being patriotic and nationalistic, otherwise you're not. It is stupid. There is a big difference between being patriotic and being jingoistic. We definitely need to be level headed, look at perspectives with an open mind. You can't be following one strict line that anyone going off this line is being anti national. We are in a Democracy. Democracy is all about debate, dissent and being able to argue our point out. The moment you argue against the government policy you can't be called an anti-national. God forbid if you are having a Muslim name, then you become anti national and Pakistani. Where does Pakistan come into it! When Shah Rukh was talking about the issue, he didn't utter the word Pakistan. No reference to Pakistan. First thing is Pakistan chale jao. Oh he's the same as Hafiz Saeed. What is that man talking about, either he's not hearing what Shah Rukh is talking about, or he doesn't know what Hafiz Saeed talks about. To make such absurd statements and these are elected representatives of the ruling party. Two days later you can't say that they are making their own statement.