After impressing the audience with her mesmerizing beauty and spectacular dancing skills, Baaghi 2 actress Disha Patani now stuns the audience with her jaw-dropping action side in the latest audience. The actress took to social media to share a work out video where Disha is seen kicking, boxing and headstands amongst others. 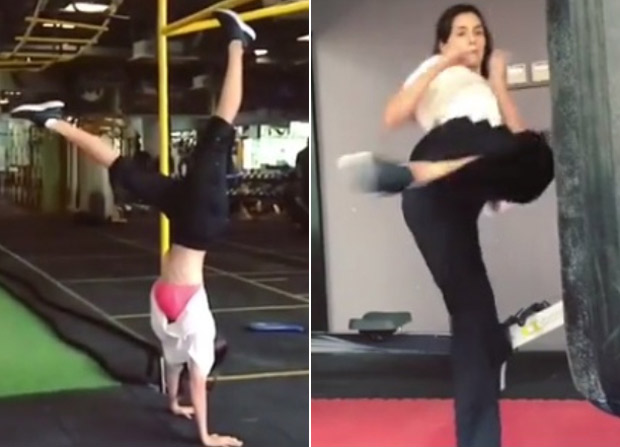 WATCH: Disha Patani packs a punch with kickboxing and headstand

One of the fittest actresses in Bollywood, Disha Patani has wooed the audience with her washboard abs and perfect figure time and again. Giving a glimpse into her hard-core workout routine, Disha shared a video on social media proving to be a motivation for her followers. With her captivating smile and toned abs, this young beauty of B-town is winning the hearts of many.

Disha Patani is amongst one of the most rapidly growingly celebrities on Instagram and enjoys the fan base of millions. After the back to back success of M.S. Dhoni – The Untold Story and Baaghi 2 which raked more than Rs. 100 crores at the box office, Disha Patani will be next seen in the upcoming film Bharat along with superstar Salman Khan and Priyanka Chopra.

In Bharat, Disha Patani will be seen portraying the role of a trapeze artist in Circus set in the 1960s. The actress will be playing a pivotal part in the film and has a strong character. Disha Patani, who is just a couple of films old in Bollywood, had earlier shared the excitement by saying, “I’m excited to be a part of Bharat, it’s like a dream come true to get an opportunity to work with Salman sir and I can’t wait for the journey to begin. I am a big fan of Ali Abbas sir’s work".