Ali Abbas Zafar is gearing up for yet another interesting tale with Bharat starring Salman Khan and Katrina Kaif in the leading roles. But, before Katrina came on board, Priyanka Chopra was supposed to be the lead actress. She had to leave her comeback project Bharat a month before the film went on the floor due to her wedding plans with Nick Jonas. Katrina Kaif was roped in soon after that. While it seems like Salman wasn't too happy about it, Ali has a different take on her exit. 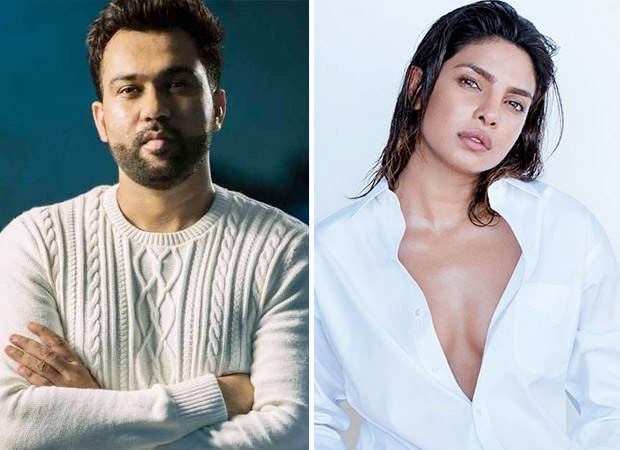 Speaking EXCLUSIVELY to Bollywood Hungama, Ali Abbas Zafar was asked about Priyanka Chopra's exit from Bharat and how he had handled the situation. "Main yeh maanta hoon, dekhiye, aap kya karte hain or aap kaun ho ismein bahut bada farak hai'. Hum kya karte hai  - hum saath mein film bana rahe hai. Lekin, hum kaun hai? Hum toh insaan hai na. Agar koi insaan aake mujhe apni life mein joh uske saath chal raha hai, chahe acchi cheeze ya problems hai, woh share karein toh main usko professional nazariye se judge nahi kar sakta. Main usko as an insaan hi judge kar sakta hoon. (I believe that what you do and who you are, are two different things. What do we do? We are making a film together. But, who are we? We are humans first. If someone comes up to me to inform what is going on in their lives - be it good or share their problems - so I will not judge them professionally. I will only judge them as a human). "

He further said, "Jab Priyanka ne aake humein bataya ki inn reasons ke wajah se mujhe lagta hai ki hamari dates work out nahi hongi, toh tumhe Ali kya lagta hai? Toh maine unse yehi pucha ki 'Tum iss time pe apni professional life se zyaada upar personal life choose kar rahi ho shayad, tumhari jagah main hota toh meri bhi yehi priority hoti'. Kyunki, kaam hamara ek jagah hai but hamari personal life bhi hai jisme utaar chadhav aate hai. Toh maine unko bahut pyaar se bola 'Joh tumhe sahi lage tum woh karo. Ab yahan se hamari zindagi thodi hilegi ya badlegi, usko sambhalne ki zimmedaari meri aur Salman sir ke beech mein hain'." (So, when Priyanka approached us to state her reasons due to which her dates won't work out and said 'What do you think, Ali?' I simply said, 'At this time of your career, if you are choosing your personal life over your professional, I would have probably done the same if I were in your place.' I know work has its own place but we also have personal lives in which we also see ups and downs. So, I told her lovingly that, 'Whatever you feel is right for you, you do it. From now on, there will be some shift and changes in our lives but that will be between me and Salman sir to take care of.')

Ali added, "Aur jaise aap bhi jaante hai aap logon ke saath spend kiya hai time ki unka(Salman Khan) bhi sense of humour bahut accha hai aur kahin na kahin unka sense of humour mujhe bhi rub karta hai. Aur woh toh kisi bhi cheez se waise hi nahi hilte hai. Unki life mein waise bhi kitna utaar - chadhav aayein hain. Meri zindagi mein unke saath kaam karke ek badlaav aaya hai woh yeh hai patience. Ki aap jahan hai wahan aap sthir bhaav se khade ho. Aapke aas paas joh raha hai woh hoga. Aap aage badein. Aapke life mein joh cheez honi hai woh sahi tarah se upar wala karega ya aapke aas paas log karenge. (And everyone knows who has spent time with him (Salman Khan), he has a good sense of humour and somewhere down the line, it has rubbed off on me as well. And he does not get disturbed due to anything because he has already seen a lot of ups and downs in his life. One thing that has changed in me while working with him is patience. Like, where you are, you have to be stable enough. You have to move ahead. So, whatever is going to happen in your life, with god's grace it will happen or someone around you will do it.)"

Salman Khan had taunted recently during Twitter interaction that Priyanka Chopra did not much time for Katrina Kaif to prepare for the character. When asked about the same, Ali said, "Ab woh toh Salman sir ka sense of humour hain ki 'agar woh pehle bata deti toh hamare paas jyaada options hota' karke.. Lekin, kuch aisa tha nahin. Katrina ko film karni thi. Katrina hamesha se mere se mazak mein Tiger Zinda Hai ke dauran bolti thi ki 'Yeh joh tum next film kar rahe ho na, dekhna yeh laut kar phir mere paas hi aayegi.' And you know, main unhe attitude deta tha ki 'Aisa nahi hoga, Katrina.' Ab kahin na kahin hum teeno ko jod rakha hain.' (Now, that is Salman sir's sense of humour like 'If she had told us early, we would  have had more options.' But, there is nothing like that. Katrina wanted to do the fil. She would joke about it during Tiger Zinda Hai that 'this film will come around and come to me only in the end'. I would quip that 'this won't be happening'. But, destiny has its way and all three of us are bound together.)"