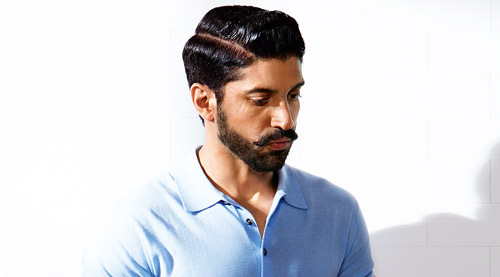 Dil Dhadakne Do-with his various social activities and also a television show that he took time off to host. 2016 begins for Farhan with Wazir, a film where he

shares screen space for the first time with the mighty Amitabh Bachchan. He opens up in an interview with Subhash K Jha.

Wazir looks like a political thriller set in Kashmir?

Only a portion of the story is set in Kashmir. But there is nothing political about Wazir. It does have a terrorist character. But the conflict is personal. What was so appealing about the

script when I heard it from the producer Vidhu Vinod Chopra was that besides the drama and romance, there is at the heart of the film this unlikely friendship between these two men played by Mr

What fascinated you about that friendship?

These two men are so different from one another. And they share such an amazing camaraderie. That was very appealing to me. I am a huge admirer of Mr Bachchan. So there was a lot of distancing

I know. And it's cool that he is casual and informal and gets along so well with all his co-stars. But it took me a while to get used to his warmth. We spent a lot of time together.

So you got really pally with each other?

Pally is a bit extreme. But we had some really interesting conversations. I spoke to him about his films, his experiences and his approach to roles. He spoke a lot about my father (scriptwriter

Javed Akhtar who had written some of the Big B's biggest hits).

I've always been a fan. I made Don because I am a fan of Mr Bachchan. I learnt so much talking to him. One had always heard about his dedication and professionalism. Now I got to experience

it. He is still so excited about every scene. I wish I could be like him about my work at his age!

How do you assess Bejoy Nambiar as a director?

Very sound knowledge of the craft and very trusting of and very sensitive towards his actors. He gives actors a lot of freedom. Looking at his work one would think technique is the dominant factor

in his creativity. But there is a lot more. He has a keen eye for detail to create the right ambiance.

Yup, that was me. No body double. We did some tricky action on a mo'bike after a lot of careful rehearsals. I haven't done action like this before. Unless you want to look at Bhaag Milkha

Bhaag and my character's physical exertion as action.

There is a lot of action in the film?

Wazir is a very agile film. I loved it. Although Mr Bachchan is in a wheelchair in the film he is a serious go-getter.

And what about Aditi Rao?

She's got a wonderful contagious laugh. Nowadays everyone involved with the making of a film is so clued in. The work methods are so well oiled. Everyone does the best. Aditi and I had good fun. We

hung out together and shared laughter.

Have you sung in Wazir?

No, my character didn't allow me to. But there are songs in the film.

Have you signed anything after Wazir?

No I am taking a 2-3 month break before signing anything. I've been doing a lot of things in 2015 including a TV show I Can Do It. I need to re-charge my batteries.

Well, you certainly wear many hats and very successfully?

I've no complaints whatsoever. I've done whatever I wanted to do. I hope I continue doing that in the coming year as well.