Vicky Kaushal, who is currently considered as one of the most sought after actors, started his career with many off-beat films. Readers would be aware that despite his struggle, the actor, actually hailed from a family of Bollywood since his father Sham Kaushal was a stunt coordinator. Veteran action coordinator Sham has worked with many names and even big projects. Amongst them was Shah Rukh Khan and in a recent throwback photo shared from the sets of the superstar’s historical drama Asoka has caught everyone’s attention. 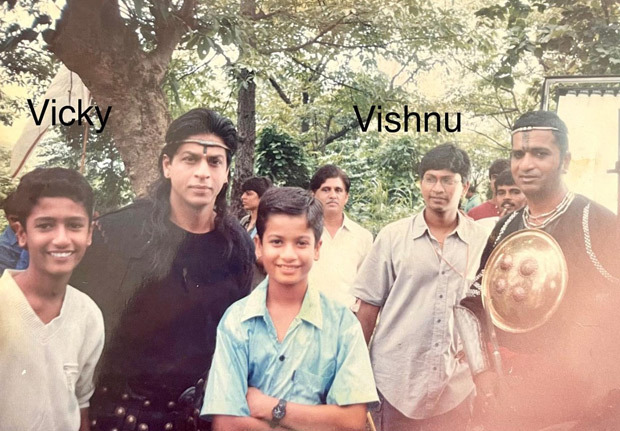 Movie buffs would know that Shah Rukh Khan played the role of the legendary king Asoka in the film by the same name and he featured alongside Kareena Kapoor Khan who played the role of his lover Kaurawki and Hrishita Bhatt played the role of his wife, Devi. Sham Kaushal, who was the stunt coordinator of the film, had actually taken his kids, Vicky and Sunny to the sets of the film. Furthermore, he also shared this epic moment where we can see the thrilled Kaushal brothers posing for the camera.

Vicky Kaushal and Sunny Kaushal were all smiles for the photo and sharing it on Instagram, Sham also penned a lovely note as its caption. He said, “By God’s grace this photo was taken in 2001 during the shooting of Asoka in Film City. Vishnu Vardhan was asstt director & Vicky was studying in 8th standards. No body ever imagined that one day Vicky will join film line & in 2022 both of them will be winning Best Director & Best Actor Awards respectively for Shershah & Sardar Udham. Destiny & God’s blessings #vishnuvardhan @vickykaushal09 Rab di meher. ????????????????”

Asoka, also starring South superstar Ajith Kumar as the antagonist with Danny Denzongpa and Rahul Dev playing supportive roles, released in 2001. The film showcased the journey of Asoka and how he came to embrace Buddhism.

Talking about the current work of Vicky Kaushal, the actor has Sam Bahadur with Sanya Malhotra and Fatima Sana Shaikh, Laxman Utekar’s next with Sara Ali Khan and the historical drama The Immortal Ashwatthama in the pipeline.

Also Read: Photos: Ali Fazal and Richa Chadha snapped at their wedding reception along with other celebs