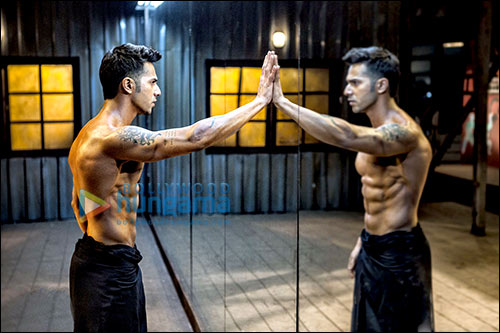 Earlier we had mentioned about how Varun Dhawan has been flaunting his chiseled body in the upcoming dance drama ABCD 2. But what we did not know is the fact that choreographer turned filmmaker Remo D'Souza who roped in the actor to continue the dance film franchise, was the one who was very particular when it came to Varun's physique in the film.

Remo D'Souza was apparently looking out for someone who has a lean and an athletic body because of which Varun Dhawan had to undergo extensive training for the film. Remo said, "I wanted a lean and athletic body for which Varun stopped working out and took up dancing to shape his body. He was required to stretch for half an hour before every practice and then did dance rehearsals for hours together. He did a lot of different dance styles which opened his body muscles and put hours of contemporary dance for a piece. He went on a very strict diet but I guess the best part was that he was enjoying what he was doing without realising it and if you see him in the film, his body looks exactly like a dancer, lean and athletic."

Produced by UTV Disney, ABCD 2 also stars Shraddha Kapoor, Dharmesh, Lauren Gottlieb among others and is slated to release on June 19.