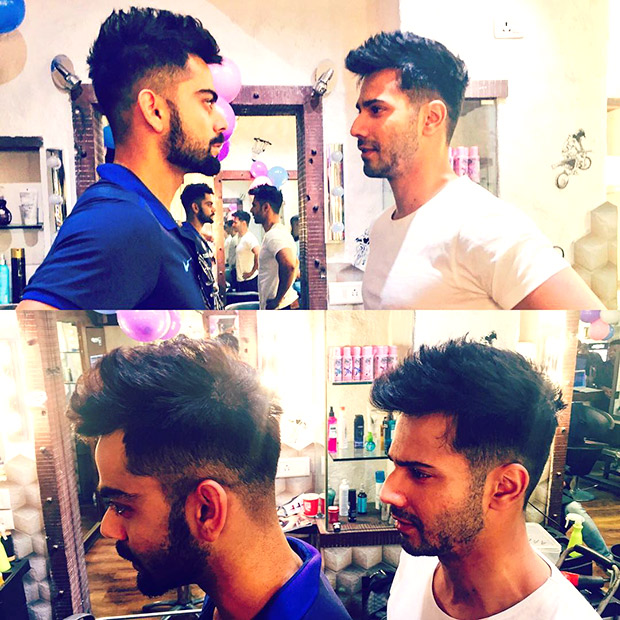 While we all know the ‘connection’ Virat Kohli has with Bollywood, we now hear that the popular cricket star is a part of Badrinath Ki Dulhania. Not quite literally, but, reportedly the protagonist of the film Badri aka Varun Dhawan is said to be a huge fan of Virat Kohli and here’s what he did to show his fandom.

Varun Dhawan’s hairstyle for Badrinath Ki Dulhania is inspired by Virat Kohli’s hairstyle. When the actor went to the salon to get the specific hairstyle, he co-incidentally came across Virat who too was present there. In fact, right after the styling, the two even got pictures clicked together.

Varun Dhawan shared a collage of him along with Virat Kohli on his Instagram page with the two sporting the same hairstyle. He shared a note along with it saying, “Badri is only @virat.kohli fan. When I asked my director who does Badri love @shashankkhaitan said #viratkohli. Luckily virat was cool enough to let me come and cut my hair alongside him. Let me tell you he is very down to earth and humble. He is a national treasure today but I am fan of his because he hasn't changed even a little from when I meet him 4 years back #realhero.”

Badrinath Ki Dulhania brings back the trio of Varun Dhawan, Alia Bhatt and Shashank Khaitan in yet another love story (after Humpty Sharma Ki Dulhania in 2014). The film, produced under the Dharma Productions banner and Fox Star Studios, is slated to release on March 10.