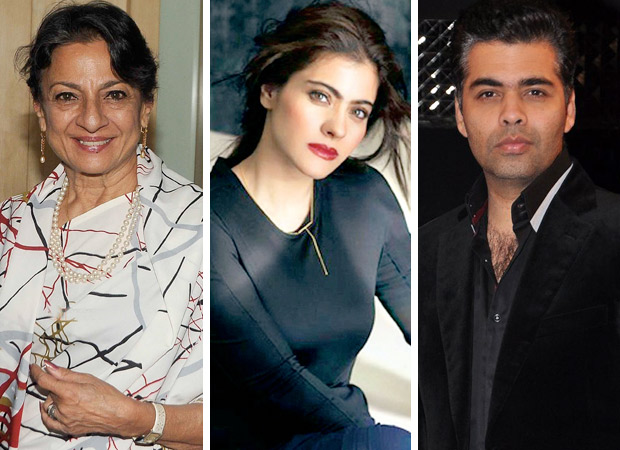 After their cold war since Diwali last year, when Karan Johar and his close buddy Kajol Devgn finally patched up last month, B-Town folks heaved a sigh of relief. While most people thought it was either Karan or Kajol who initiated the peace process, here’s some news we heard. It was Kajol’s mother Tanuja who convinced her daughter to extend an olive branch and got him invited for her elder daughter's birthday in August.

Says a source, “It has been reported that Kajol invited her family, including sister Tanishaa and mother Tanuja and a few friends to celebrate her 43rd birthday on August 5 at a suburban restaurant. One person she extended the lunch invite to also, was her estranged buddy Karan Johar and that surprised many. But what few know is that it was Tanuja who convinced her elder daughter to patch up with the filmmaker and had been asking her to do it for some time. It was Tanuja who sent a text message to Karan inviting him to her lunch. Of course, when they met it was an emotional reunion for all. Kajol was considered as Karan's lucky charm in his films and Karan's mother, Hiroo, too is extremely fond of her. Tanuja felt that such friendships are rare and the birthday lunch was a perfect occasion to patch up.”

According to the source, “The senior actress has always felt that the fallout between Kajol and KJo last year was completely unnecessary and could have been sorted out if both had communicated with each other. In the film industry true friendship is rare and Kajol and Kjo have been friends for over 25 years and stood by each other through thick and thin. Tanuja herself is fond of the filmmaker and knows Karan’s family too very well as she’s a part of the film industry herself. While Tanuja doesn’t interfere in her daughter’s Kajol and Tanishaa’s personal and professional lives, she is forthright, has a strong mind and always tells them what’s on her mind as they are like her friends.”

When we tried to contact him, Karan Johar remained unavailable for comment. Tanuja says acerbically, “Don’t ask me such inane questions!”

The fallout happened before Diwali, when Kajol's producer-actor-director husband Ajay Devgn and Karan had locked horns over the release of their respective films, Shivaay and Ae Dil Hai Mushkil and Kajol had supported Ajay over it. A devastated Karan wrote in his autobiography, “She can never come back to my life... she's killed every bit of emotion I had for her for 25 years. I don't think she deserves me. I feel nothing for her anymore. I don't have a relationship with Kajol anymore. We've had a fall-out. Something happened that disturbed me deeply which I will not talk about because it's something that I like to protect and feel it would not be fair to her or to me. After two and half decades, Kajol and I don't talk at all. We just acknowledge each other, say 'hello' and walk past.” But things changed after KJo's twins arrived on February this year and he sent Kajol a picture of his babies. She reciprocated recently by 'liking' a picture of twins, Yash and Roohi, on Raksha Bandhan, on Facebook and he followed her back on Instagram. The birthday invite SMS followed soon after and today the friends are back to celebrating their dosti once more.