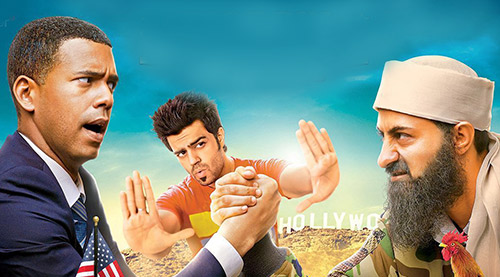 Satirizing terrorism is as tricky as making molar surgery mirthful. Abhishek Sharma did it once in Tere Bin Laden, and then fall flat on his face with a raunchy sexed-up version of Basu Chatterjee's Shaukeen. So Sharma is back doing what he thinks he is best at.

Generating titters out of terrorism.

And though it has its ha-hee-hee-ho-ho moments it is not quite the....errr... blast that it promises to be, mainly because the characters behave as though they are in a stand-up comedy act where every actor must ...well, act. So everyone is acting all the time...sometimes double-acting because some of the pointedly parodic people ,like Sikandar Kher who plays -don't laugh-a CIA agent masquerading as a Bollywood film producer-lead double lives, alas ,failing to generate double laughter.

Farce is clearly not young Kher's forte, though what is his forte nobody knows.

Neha Sharma and Abhishek Sharma's script is a satirical scam. It rips off various emblems of political dissent from the world map to generate laughter .Agreeably, the shout-out-loud humour shuts out crass humour, except for a few below-the-waist allusions BLOWING in the wind, if you know what I mean (wink wink) .

Director Sharma fills the spaces in the satire with overt political innuendos, the kind that are sent off in bulk on your smart-phones. What I found missing in the sequel was the audacity of the first film where the director and the team had nothing to lose. This time there is the frantic and unceasing need to generate guffaws even when there is little room for it. The actors, all eager to score, pause breathlessly to jump in with their next still-wet-and-sticky-pain-on-the-wall funny-line while other actors speak.

Everyone seems to be working at cross-purposes, and not only as per plot-plans. The blueprint for laughter is laid down when a wannabe Bollywood director Sharma (Manish Paul whose prime business is anchoring, though he is not seen doing much of that-anchoring the plot-- in this film) pitches a funny idea to the Shetty sisters (Pooja and Arati Shetty who have produced Tere Bin Laden, get it?) about a Osama look-alike who is recruited to resurrect the real Osama from the dead for a film.

After the film clicks they team up with the Osama lookalike Paddi (Pradhuman Singh) again to make another 9/11 satire.

The plot of the film is actually the truth behind the existence of this redundant thought not completely under-whelming sequel. So the joke is on us.

The plot propels its gag-lines into characters as varied as President Obama (yes, he is part of the cast) and a terrorist named Khalil (Piyush Mishra) . What do Obama and Khalil have in common? They both want Osama dead or alive. Having got that ingenuous premise in place the plot dithers on the task of developing a droll dialect to sustain its farcical fortunes. It's not entirely a losing battle. But the jokes are never more than what we see in sitcoms where the tongue is lodged firmly lodged in the tweak. Improvisation is the mantra for survival.

The actors are all blessed with good comic timing. But the jokes are not aimed well enough for the rapid-fire flow of farcical funds that Manish Paul, Sikandar Kher and others invest into this sequel.

I wish I could say, go have a blast, to stay in the mood of the Osama-Obama war to finish. But really all I can say is, not again please? Thank you.