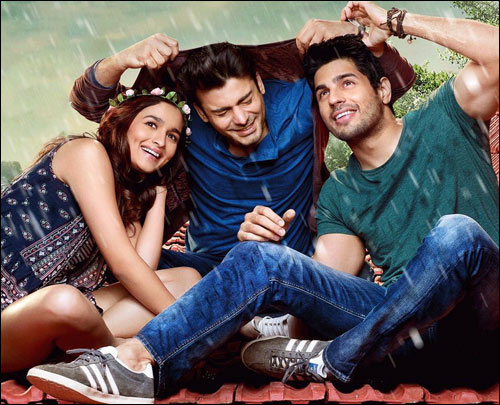 Fawad Khan turns out to be gay in the plot. There. I said it. The family secret that unravels towards the end when...well, things falls apart and the center cannot hold. Or so it seems. Until director Shakun Batra manages to make the loose ends come together in a messy kind of way that is so integral to the way families are. Never one. Ever always fun. All tangled in inter-personal relations, governed by emotions that they seldom understand. So who are we to judge them?

It was Leo Tolstoy who said it. "All happy families are alike. Each unhappy family is unhappy in its own way." The family in Kapoor & Sons, played with magnificent eloquence by actors who know their job, is happy on the surface. But scratch the polished exterior, and you get frightening fissures.

It is up to the outsider who peers into the family scene to make some sense of what lies beneath.

And this Kapoor family-my God!-is not dysfunctional. It's deliriously unhinged in its crisscross of unexplored emotions waiting to burst open in the eleventh hour.

First things first, Kapoor & Sons is not afraid to peer into the abyss of a family besieged by unresolved issues that tumble out towards the end with the urgency of a drama that must be played out before time runs out. Shakun Batra and his co-writer Ayesha Devitre Dhillon conceive a family tree that never gets over-burdened by over-statement. The narrative allows the "tragedy of an unhappy family" to play out non-laboriously, giving the characters a chance to grow in ways that they cannot control.

For a film laden with family secrets there is a surprising lack of opulent drama in the narrative. The conflicts are played out remarkably drained of melodrama but replete with a kind a dark wicked humour that we seldom experience in mainstream cinema.

There is this deviously written scene where a bewildered plumber tries to fix the kitchen sink while the entire family bickers loudly about its financial problems.

"How much do you want?" the family stops squabbling long enough to ask.

"Whatever you can afford," whimpers the plumber desperate to make his getaway. We , providentially, never feel hemmed in by this family's domestic distress which grows inwardly and finally implodes in scenes that run into each other towards the end in the way the life tends to outrun man-made plans.

There is a lot of naughty humour in the narrative emanating largely from Rishi Kapoor's 90-going-on-19 patriarch's character. Especially delicious is this real-life Kapoor's ogling at Mandakini's bare-breasted images from Raj Kapoor's Ram Teri Ganga Maili. Of course the fact that Rishi Kapoor's real-life father directed the erotic feast is a killer of an in house joke.
Rishi Kapoor is undoubtedly the show stopper and the scene stealer here, followed closely by Ratna Pathak Shah whose portrayal of the worn-out housewife desperately holding on to shreds of optimism is pitch-perfect. And Rajat Kapoor as the father fighting off financial and extra-marital problems is sullen and subdued.

But after Rishi it is Fawad Khan as the family's "perfect son" who is controlled and in command of his character's troubled inner-world. Fawad effortlessly chews up Sidharth Malhotra in every scene that they appear together. Not that Malhotra doesn't try. He does. But the effort shows each time Fawad is in the same frame. They play writer-brothers who have always been at loggerheads for reasons that appear silly and trivial. But that's the nature of family secrets. They rip a relevance only in the discontinuity that creeps into family ties.

Alia Bhatt's sunshine girl act is problematic. She is more annoying than cute. We are supposed to fawn over her character's feyness. But her antics including kissing a man she has just met merits as borderline brazenness. As the only major character who is not part of the Kapoor family, Alia needed to justify her presence far more strongly.

The really strong moments in the film occur when Ratna Pathak Shah's maternal allegiance is threatened by the revelation regarding her favourite son's sexuality. No one mentions the taboo 'g' word. But the atmosphere crackles with nerve racking tension once Fawad's secret is out of the closet. Here the narrative needed to give Ratna Shah and Fawad Khan more room to grapple. But there are other family crises to deal with, and sadly those are not half as gripping as this one.

Like the family it presents, Kapoor & Sons does not purport to be a perfect nor a seamless family drama. It does something far valuable. It takes all the flaws and imperfections of a dysfunctional family and trans-creates them into a drama of muted grievances and unspoken recriminations.

And Rishi Kapoor's 'Daadu' act makes you forgive all the flaws of immaturity evident in some of the pivotal performances.

"You know what they say about men with long noses?" Alia teases Malhotra.

We all know what they say about girls who make phallic jokes just to appear cute. Never mind.