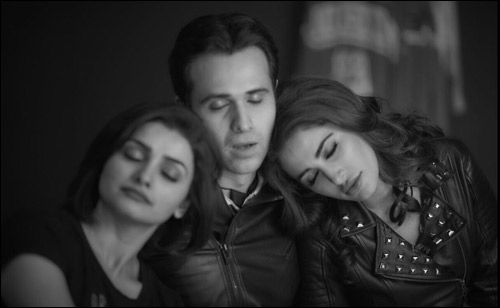 The Anthony D'Souza directed biopic, Azhar, which is based on the life of ex-Indian cricket team captain Mohammed Azharuddin has been picking up steam. In fact ever since the film's announcement the audience has been eagerly anticipating its release. Well recently photographer Avinash Gowariker posted an image of Emraan Hashmi, Nargis Fakhri and Prachi Desai that was shot after the film wrapped up shooting recently. Posting the image on twitter Gowariker added, "#PostPackUpShot after a loooong but fun shoot for @AzharTheFilm with @emraanhashmi @NargisFakhri & @ItsPrachiDesai".

Reacting to the same Nargis too took to twitter adding, "We worked so hard! @emraanhashmi @ItsPrachiDesai @AzharTheFilm". Apart from this the actress also posted another picture from the sets of the film featuring her along with her costar Prachi saying, "An exclusive image of the beautiful leading ladies of #Azhar, @ItsPrachiDesai & @NargisFakhri! #AzharPhotoshoot".

Azhar which chronicles the life and times of the former Indian cricket Captain from his international cricketing successes to his more controversial detours is produced by Balaji Motion Pictures and MSM Motion Pictures. The film is slated to release on May 13, 2016.