B- Town has always welcomed star kids with open arms. It is once again ready to welcome another set of star kids this year with Karan Johar’s upcoming production, Dhadak. The film marks the debut of late actress Sridevi and Boney Kapoor’s daughter Janhvi Kapoor. It also stars newbie Ishaan Khatter who is Shahid Kapoor’s brother. The fresh pair is pretty stoked to see the audience’s reaction to the Sairat adaptation. They are currently touring around the country promoting the film. 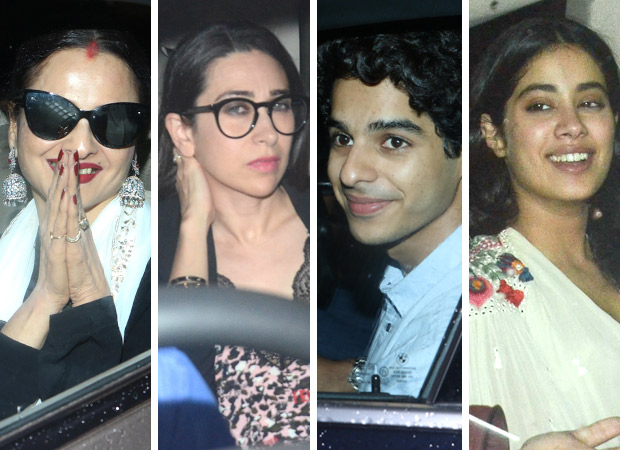 Meanwhile, there was a special screening held at Yash Raj Studios on July 18 where A-list celebrities came to support the newbie stars. Two of close friends of late actress Sridevi, Rekha and Karisma Kapoor, too came to support Ishaan and Janhvi and give them their blessings for highly awaited Dhadak. The film, which is a day away from its release, is definitely one of the most anticipated films of the year. A video has been doing the rounds of social media wherein Rekha is seen giving blessings to Ishaan Khatter whereas Karisma is seen giving hug to debutante Janhvi Kapoor.

The original film, Sairat, starred Rinku Rajguru and Akash Thosar and was helmed by Nagraj Manjule. Dhadak is produced by Dharma Productions and is directed by Shashank Khaitan. It follows the story of Madhukar and Parthavi and their fierce and unconditional love that fights fate. But as their love grew, so did their problems as their families reject their love. Dhadak also stars Ashutosh Rana and is slated to release on July 20, 2018.

Also Read: When Janhvi Kapoor thought she was Sridevi while watching a scene from Dhadak