The feisty millennial, Janhvi Kapoor is all set to make her much-awaited silver screen debut with Dhadak opposite Ishaan Khatter. The eldest daughter of Late Sridevi and Boney Kapoor has hit the genetic jackpot of good looks, grace, and poise, and distinctly resembles her mother. She enjoys a tremendous social media presence, 2.1 million followers on Instagram. Janhvi Kapoor is a bonafide fashionista, her stellar style shenanigans even before her debut were lapped up by the fashion conscious masses. While her personal sense of style comprises all that’s in vogue in addition to experimenting with risqué cuts, bold silhouettes and unconventional colours, Janhvi teamed up with ace fashion stylist Tanya Ghavri for the promotions of Dhadak. While she majorly dabbled in traditional and contemporary Indian and neo-ethnic ensembles as her promotional style, she also sported some chic dresses. With her lithe frame, cute smile, large eyes and long locks adding a new wow to any designer ensemble, we couldn’t help but wonder about Janhvi’s promotional style distinctly bearing a resemblance to her mother’s off-screen style.

We all know how stunning Sridevi was, her ageless poise and grace was exemplary. Jhanvi Kapoor strides in with an uncannily similar flair of elegance and a serious whiff of confidence, just like her mother. An alumnus of the famed Lee Strasburg Theatre and Film Institute and a trained Bharatnatyam dancer, Jhanvi is slated to spell magic with Dhadak and is a diva in her own right. Here is a closer look at how Janhvi has emulated her mother in her fashionable tidings. 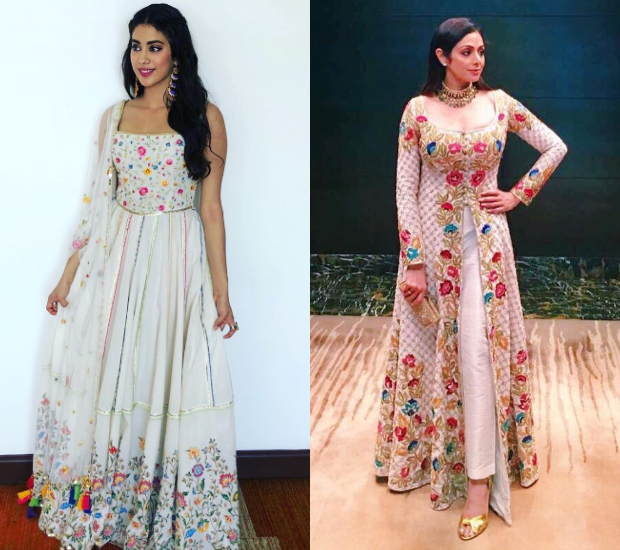 For Dhadak promotions in Jaipur, Janhvi was seen in a Sukriti and Aakriti floor-length multi-coloured sequenced and gota work Anarkali. Rings and statement earrings, wavy hair and subtle makeup rounded out her look. Sridevi had sported a Manish Malhotra bold floral embellished creation, similar to Janhvi’s. 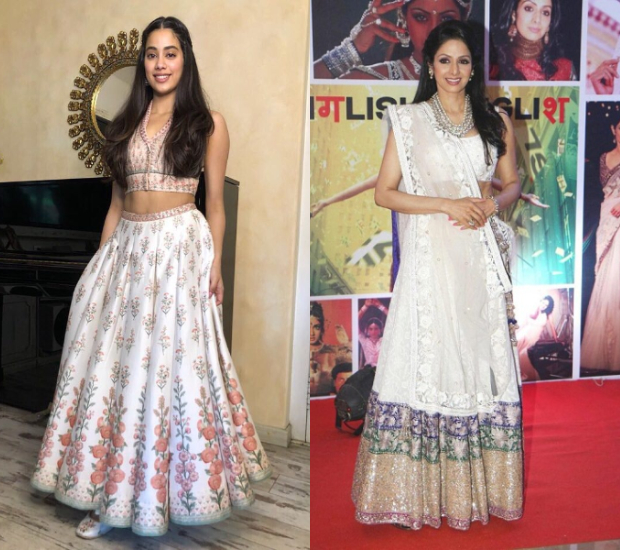 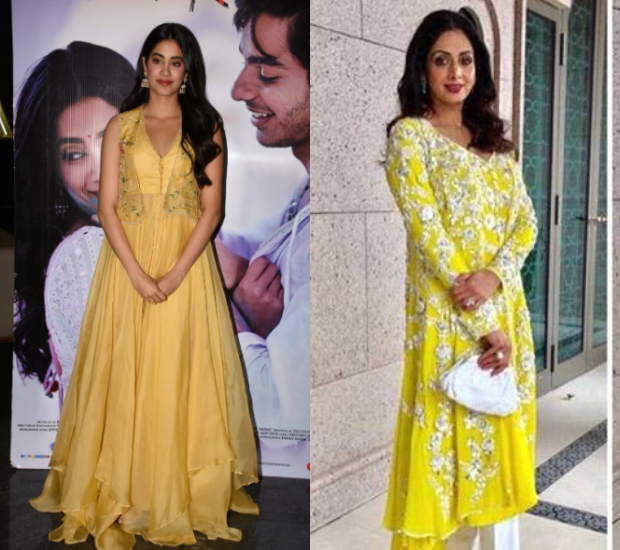 Janhvi wore a pastel yellow coloured organza hand embroidered three piece suit by Anushree Reddy that also featured a floral hand embroidered jacket. Subtle makeup and jhumkis with sleek hair rounded out her look. Sridevi had sported an embellished bright yellow suit by Manish Malhotra for a wedding, back in 2017. 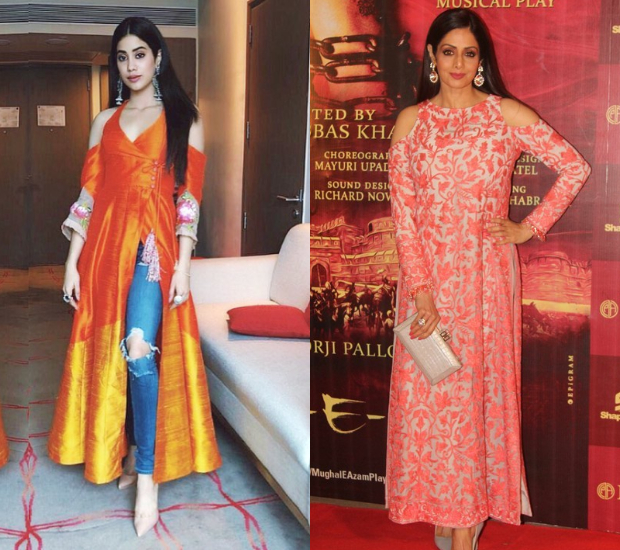 Janhvi sported a kalidaar cold-shoulder cut burnt orange Manish Malhotra kurta with fitted and distressed denim, statement earrings and pumps. Sleek hair and subtle makeup rounded out her look. While Janhvi carried off this traditional yet contemporary look with aplomb, Sridevi had worn a similar col-shoulder cut orange floral ensemble by Manish Malhotra at the premiere of the epic drama, Mughal-e-Azam in Mumbai. 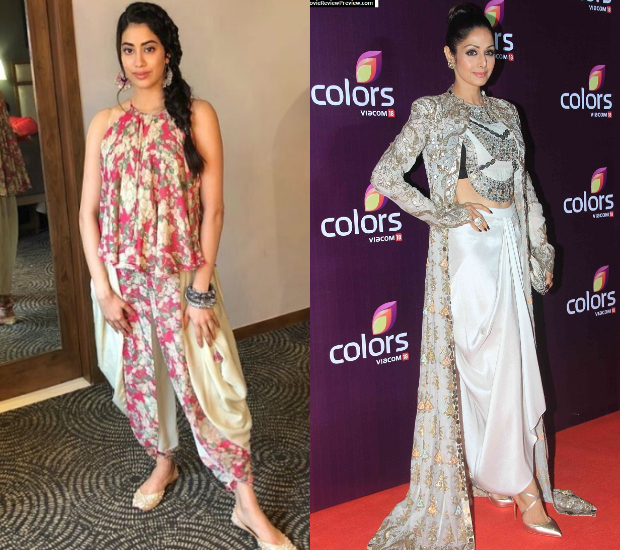 Janhvi sported Nikasha separates with a messy braid and rounded out the look with jewelry from Motifs and Needledust juttis. Sridevi too had sported similar dhoti pants with an opulent Ananmika Khanna embellished ensemble, just like her daughter has!

Also Read: Does Janhvi Kapoor think of Sara Ali Khan as competition? Her answer will surprise you 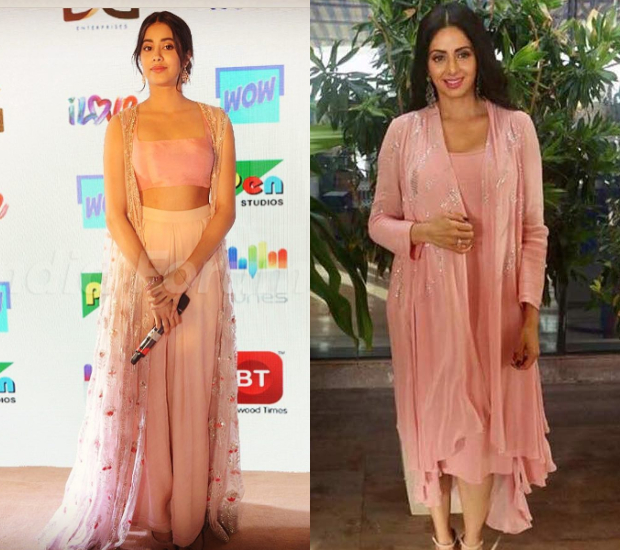 Janhvi flaunted her petite frame in a Jade creation, finishing out the look with earrings, subtle makeup and an updo. Sridevi had sported a similar pale pink coloured dress from AM PM Fashions replete with a matching sequined shrug. 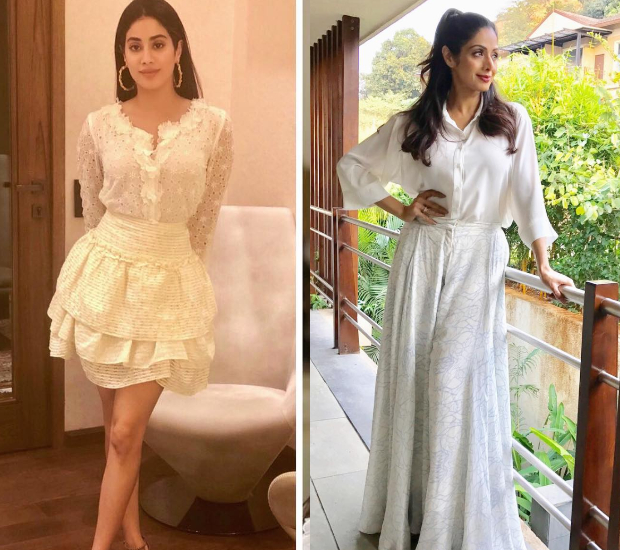 A bona fide star kid, Janhvi is adept in style and has stamped her firm presence on the fashion charts. From flaunting millennial style sensibilities that range from gong traditional to taking those style risks, Jhanvi Kapoor has engaged us consciously and her uncanny resemblance to her mother only strengthens her foothold in the industry. Dhadak, an official remake of the regional hit Sairat is all set to release on July 20.