Sridevi is no more. It will take us a while to accept this bitter truth. She was just 54 and looked like she was not a day over 30. Her last release was Mom and she had already completed her cameo with Shah Rukh Khan for his upcoming Zero and was awaiting the debut of her eldest one Jahnavi Kapoor. This fateful incident happened at her nephew Mohit Marwah’s wedding in Dubai. According to reports, the wedding festivities had ended but Sridevi had chosen to stay back. Her daughter Khushi and husband Boney Kapoor flew back to Mumbai to be with elder one Jahnavi Kapoor who is prepping for her debut, Dhadak. According to reports, Boney went back for a day to visit his wife and surprise her with dinner when this horrific incident happened. 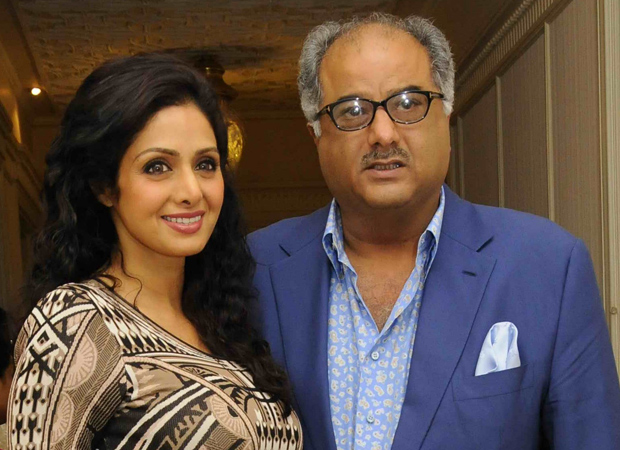 Sridevi made a lot of news for her stylish outings at the wedding and now a dance video of her is doing the rounds. This probably is her last video and we miss her even more, watching it. Sri is seen shaking a leg to Katrina Kaif’s ‘Kaala Chashma’ alone while the Kapoor clan was dancing on the same floor, separately. Just then her husband Boney came and stood behind to join his wife. She then indulgently hugged him. Check out this cute moment between the couple captured in the video.

For those who don’t know, Sridevi’s love story with Boney is controversial and has made headlines in the nineties. The film producer was already married when he met and fell in love with the English Vinglish star but they were destined to be one and hence he left his first wife Mona Kapoor and married Sri. After all these years, love between them was still the same. This video proves it. Take a look.

An actress who was known for her phenomenal dancing...this was #Sridevi ji's last dance at a wedding in #Dubai ... The song was #KaalaChashma .... Boney Kapoor ji is also there in the video... pic.twitter.com/YAvdKbohle