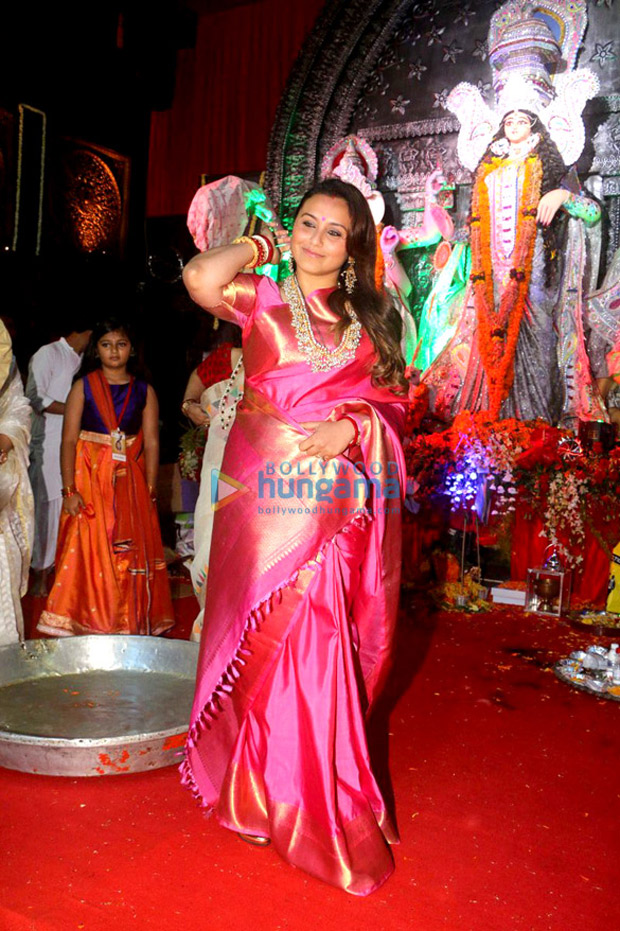 Award winning actress Rani Mukerji who was seen at several events being one of the most sought after actresses in Bollywood, decided to stay away from fame and shutterbugs ever since she has been on a maternity break. The actress has also been safely guarding her newly born Adira from the lenses that constantly hover around the star kid. But during her recent appearance the actress somehow seemed comfortable getting clicked and even posed with a smile.

Not surprisingly, her first major appearance was at the famous Durga Pooja which Rani Mukerji never gives a miss. Also attending the same event was her cousin and actress Kajol. Rani, looked graceful, in her pink saree with golden work and heavy ethnic jewellery but the actress was seen without her daughter Adira which we are sure the media was expecting eagerly. Also not accompanying her was her husband and producer-director Aditya Chopra, since he is sort of a recluse when it comes to making media appearances. Rani Mukerji spent a good half of the year away from the country in Paris as she and Adira decided to accompany Aditya whilst he was shooting his ambitious film Befikre, his directorial after an eight year hiatus.

Last seen in Mardaani, Rani Mukerji, as mentioned before, has retained her distance from media after the birth of her daughter and also has stayed silent about her future plans in Bollywood.