Kartik Aaryan is currently promoting his film Luka Chuppi which released today, worldwide. Recently, Kartik was on the sets of Dance Reality Show Super Dancer Chapter 3 where he was showered with yet another compliment from the most gorgeous diva on the show. It’s none other than judge Shilpa Shetty who complimented Kartik Aaryan. 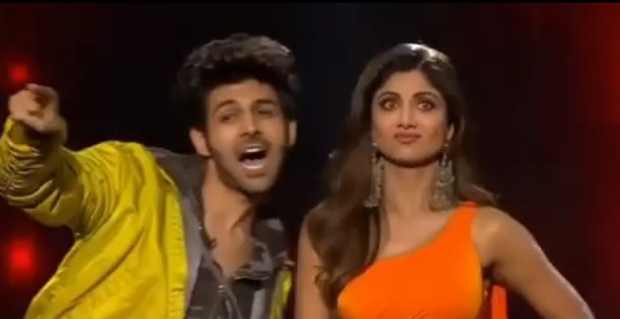 According to the promo video, the actress said that he reminded her of young Akshay Kumar and even pointed out the similarity in their initials while Kartik is KA, Khiladi Kumar is AK. Kartik, who treats Akshay Kumar as his idol and aspires to be like the superstar, was thoroughly touched by the compliment coming from Shilpa Shetty that too on national television. Shilpa Shetty and Akshay Kumar have worked in several films together and being compared to the superstar, meant a lot to the rising star.

Later, Shilpa even took her social media where she is posing with Kartik calling him a charmer and the Badshah of monologues. Kartik thanked her for the sweet compliment and posted another lovely video with Shilpa Shetty on his social media where they did the Luka Chuppi pose. She even danced with Kartik on 'Poster Lagwa Do' song which is a recreation from Akshay Kumar's film Aflatoon.

Now, that’s another milestone for Kartik. Last year too he visited the sets of the show to promote his then film Sonu Ke Titu Ki Sweety and the two bonded well. With such compliments coming his way, we must agree he is quiet a charmer!