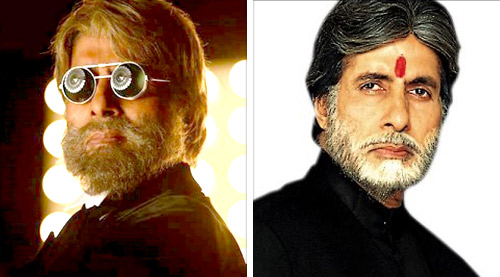 Amitabh Bachchan's Bollywood journey can be clearly distinguished into two phases - Pre and post Mohabbatein. While he enjoyed countless superhits and blockbusters in the 70s and the 80s, 90s weren't too kind on Big B when he made his comeback with Mrityudaata. It all changed after Mohabbatein though. As the living legend gets set for Balki and Eros' Shamitabh, here is looking at 10 of his biggest successes since the year 2000 when Mohabbetein hit the screens.

Kabhi Khushi Kabhie Gham [Rs. 45 crores]
The biggest of them all stays on to be Kabhi Khushi Kabhie Gham. A weep fest by Karan Johar that promised to tug the emotional strings, it had Big B playing a patriarch in a multi-starrer affair that boasted of a stellar starcast comprising of Shahrukh Khan, Kajol, Hrithik Roshan, Kareena Kapoor and Jaya Bachchan. The film stays on to be Bachchan's biggest blockbuster in overseas too till date.

Bhoothnath Returns [Rs. 40 crores]
Much anticipated sequel to Bhoothnath, the film made some good early impressions at the promo stage itself. Later, it did well on its release too as word of mouth helped it hang on well at the box office. Amitabh Bachchan was clearly having a lot of fun playing an invisible ghost in the film. While 'Party Toh Banti Hai' stays on to be a chartbuster, there was wholesome family entertainment in store.

Bunty Aur Babli [Rs. 35 crores]
The man was clearly having fun while playing a bad a$$ cop in Yash Raj's Bunty Aur Babli. Though the title roles were played by Abhishek Bachchan and Rani Mukerji, it is Bachchan Sr. jig with Aishwarya Rai (not Bachchan, back then) in 'Kajra Re' which is remembered most till date. It was fun to see Amitabh Bachchan in a cop's outfit and the film was lapped up by the masses.

Black [Rs. 30 crores]
When Sanjay Leela Bhansali and Amitabh Bachchan decided to come together for a film, it had to be something special. Black was as experimental as it gets with Rani Mukerji playing a deaf, mute and blind girl with Big B edging towards Alzheimer's too. Commercially, this film carried bleak prospects but audience turned out to be more receptive than expected. Black did well at the urban centers.

Kaante [Rs. 30 crores]
When Amitabh Bachchan stepped into this multi-starrer affair, Sanjay Gupta's Kaante was one of the biggest films put on floors. It went through its fair share of turmoil as well right from the inception till the day of release. However the action thriller found good audience for itself and Amitabh Bachchan's face-off with Sanjay Dutt found good popularity as well.

Paa [Rs. 30 crores]
Clearly, this is the most challenging role till date that Amitabh Bachchan has been a part of in a career spanning over four decades. For him to step into the part of a teenage boy was just unimaginable and with Abhishek Bachchan playing his dad, it was a thin rope being walked upon. However, Balki carried a vision and Big B was more than happy to execute that extremely well on screen. Audience loved it too.

Sarkar [Rs. 28 crores]
One of the most popular roles that Amitabh Bachchan has done in the last 15 years, Sarkar was a powerful affair with Ram Gopal Varma in an explosive form. Based on the life and times of a real life political personality, Sarkar had Big B coming up with a terrific performance with his baritone making all the difference. No wonder, dialogues were the key in this film that also featured Abhishek Bachchan.

Khakee [Rs. 27 crores]
For those hunting for vintage Amitabh Bachchan in the part of a cop, Rajkumar Santoshi came up with a worthy gift in the form of Khakee. With a stellar cast including Akshay Kumar, Ajay Devgn and Aishwarya Rai, Khakee was a 'masala' outing with Bachchan leading from the front. The film was a good commercial entertainer and was accepted by one and all.

Baghban [Rs. 26 crores]
In a central role, Amitabh Bachchan paired up with his co-star of many films, Hema Malini. As a married couple, they were clearly enjoying each other's company on screen. Their romance was text-book for those youngsters who wanted to learn a thing or two about what 'chemistry' stands for when it comes to portraying some true love in front of camera. This social film was a big success with the ladies.

Mohabbatein [Rs. 25 crores]
This was a film that started it all. The legend has it that when Amitabh Bachchan was down and out, he called up Yash Chopra in the dead of the night and expressed his interest in working for the production house. It didn't take time for Chopra Sr. and son Aditya to spin a strong character for Bachchan in Mohabbatein. With Shahrukh Khan and Aishwarya Rai bringing on the star quotient, Big B was back, and how!