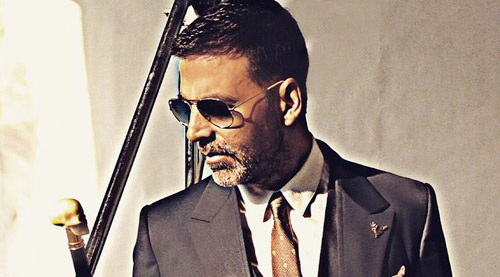 Baby has released and has seen exceptional reviews coming its way. While critical acclaim has been indeed the best ever since one can remember, what has made it count all the more is the fact that Akshay Kumar is being seen in a never-seen-before mode. While critics have hailed his performance as one of his best in a career that has spanned almost quarter of a century, audience has warmed up well by bringing in momentum as far as footfalls into theaters are concerned.

As for the treatment of the film, it is pretty apparent that Baby boasts of a unique narrative, what with third time director Neeraj Pandey making sure that the subject of global terrorism is told in a fresh manner that Hindi cinema audience has not been exposed to as yet.

"Each film is in a league of its own. Terrorism is something that we are tackling on almost a daily basis, yet each and every episode of such heinous acts is a plot on its own," says Akshay Kumar.

Ask him about the kind of level headed performance he has given in the film and he says, "I feel compelled to make cinema that entertains people as well as awakens them. This genre of film is unbelievably hard to face, but one that must be faced head on. This world isn't always about laughs, babies and fluffy dogs; this world is mean, terrifying and extremely real, so is cinema."

While the film boasts of quite a few memorable sequences that have managed to leave a very good impact, what also stand out are the scenes that feature the man who causes all the trouble, Pakistani actor Rashid Naz in the role of terrorist master mind from Pakistan.

"He is one of a kind, that's all I can say," says Akshay Kumar, "He has played his role with such conviction, he blew me away with not only his performance, but with his extraordinary effort, to give Neeraj Pandey and this film the most convincing character there could be. He has shown me that it doesn't matter what age someone might be, passion overrides anything a doctor may say. This man fought with me in the film with every ounce of strength he possessed."

In real life though, Rashid Naz was nowhere close to the menacing character he played on screen. "I will never forget the feeling of fighting a man of terror on screen, who was actually the sweetest human being one could wish to meet. Hats off to him," smiles Akshay before signing off.